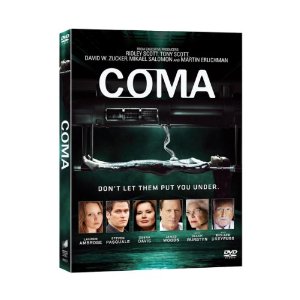 Our investigative protagonist is Dr. Susan Wheeler (Lauren Ambrose of HBO’s “Six Feet Under”), a medical student who risks her career when she finds some discrepancies at the hospital she works at. After discovering that a number of patients all fell into comas after routine operations in the same room, Susan digs deeper to find out what is happening to the patients. The suspenseful investigation only becomes more dangerous the deeper that she digs.
With the help of a young surgeon (Steven Pasquale of “Rescue Me”), Susan traces the patients to a highly secretive medical facility. With this discovery it is more than just Susan’s career which is at risk, each revelation bringing forth more danger. The cast is full of seasoned actors such as Geena Davis and James Woods, with Ellen Burstyn and Richard Dreyfuss also giving special appearances. The miniseries is all included on one disc, with no special features included or called for.