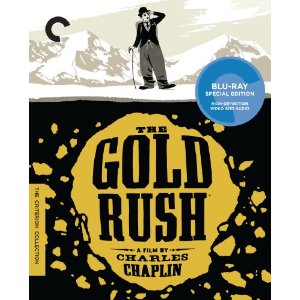 Few films have been as lasting as Charlie Chaplin’s The Gold Rush. Well into the 1940s and the era of sound, Chaplin was still making silent films which would outlast and outperform the ‘talkies’ of the time. In 1942 he even re-released a new version of his 1925 classic with sound effects and a voiceover narration to replace the original dialogue cards. Whether watching the 1925 classic silent version or the 1942 re-release, there is no denying the brilliance of Charlie Chaplin’s The Gold Rush. Both are masterpieces which have just as much impact to day as when they were first created.
Chaplin’s reoccurring character known as the Little Tramp had been around in his silent short films, but it was The Gold Rush which made him a phenomenal success. From the signature waddling walk in his over-sized shoes and pants to the undersized jacket and iconic bowler and walking cane, the Little Tramp is unmistakably recognizable. The Gold Rush has sequences which are just as recognizable, even to those who have never seen the film before. There is the dinner roll dance, which was imitated in the 1990s romantic comedy Benny & Joon, and the boiled leather shoe meal which actually put Chaplin in the hospital for insulin shock (the shoe was made out of licorice). The Gold Rush is a goldmine of unforgettable comedic moments.
The story was actually one of the few that Chaplin had completely figured out prior to the beginning of filming, and has a consistency that is lacking in some of his other masterpieces. It begins with the tale of a poor prospector with hopes of striking it rich in the . The tramp’s search for gold also ends up bringing him to a search for a companion when he meets a beautiful woman (played by Georgia Hale), and in typical fashion he must ward off the romantic competition with wit and mischievous trickery.
Slapstick humor and amazingly creative comedy aside, The Gold Rush is also an extremely sweet and emotional film. The Tramp is one of those rare characters who can misbehave in the name of what is right, drawing our affection and admiration along with the laughter. The Gold Rush would pave the way for more masterpieces, though there is no denying that they would not have been possible without the initial success of this near-perfect film.
The Blu-ray release includes a new high-definition digital restoration of the 1942 version, as well as a new 2K digital transfer of the reconstructed original 1925 silent version. The silent version comes with a newly recorded adaptation of Chaplin’s original score in 5.1 DTS-HD surround sound. An optional new audio commentary by Chaplin biographer Jeffrey Vance is also included, along with three new documentary programs and a 2002 short documentary. There are also four trailers and a booklet insert featuring an essay by critic Luc Sante and a copy of the review of the 1942 release by James Agee.