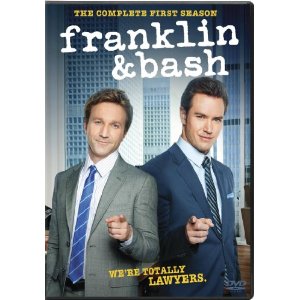 There is very little actual law in the new courtroom series, “Franklin & Bash.” The style of the show seems to be fashioned after previous series such as “Ally MCBeal” or “Boston Legal,” where it was the quirkiness of the cases and the lawyers trying them which made up the entertainment. The actual law is completely secondary. “Franklin & Bash” pushes this concept even further, to the point where the title lawyers are more like frat boys than legitimate legal council.
Breckin Meyer and Mark-Paul Gosselaar star as Jared Franklin and Peter Bash. Franklin is an intelligent lawyer whose decision not to work with his successful father and his many courtroom antics have kept him from the same level of respectability. Bash is only lower down in the food chain because of a propensity for sleeping with the wrong woman. This womanizer and courtroom clown make a perfect team somehow, and are picked up by an eccentric aging attorney named Stanton Infeld (Malcolm McDowell) to join a large firm. They use their unorthodox methods in their new job, helping an array of unique clients.
More humor than courtroom drama and more absurdities than actual legal facts, “Franklin &Bash” is an engaging and entertaining waste of time. The DVD includes all ten episodes from season one, along with a few special features. There is a gag reel, three commercials for the lawyer team, and seven brief featurettes.