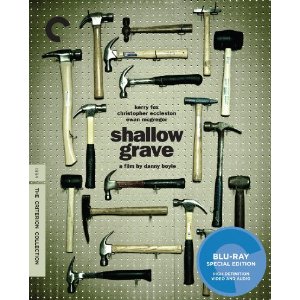 Danny Boyle is one of those rare directors with a distinctive style, despite the fact that the films he has made vary a great deal from each other. In recent years he has drawn attention with a modern fairy tale (Slumdog Millionaire) and a true story (127 Hours), while he has also made a science fiction film (Sunshine), an apocalyptic zombie horror film (28 Days Later) and a feel good family film (Millions). It is hard to believe that this is the same director who brought us the drug/heist hit, Trainspotting, until one looks at the style of each of these films. This distinctive visual stamp on his films has remained constant and recognizable since his film debut, Shallow Grave.
Shallow Grave has been described as a Hitchcockian thriller, dealing with three despicably pretentious roommates, a dead body, and a suitcase full of cash. Personally, I find that there is much more modern film noir in this tale, especially considering how much of the action is instigated by the femme fatale female roommate played by Kerry Fox. Juliet (Fox) has obviously drawn affection from both of her male roommates; the loud-mouthed tabloid journalist, Alex (Ewan McGregor in his first starring role), and the straight-laced lawyer, David (Christopher Eccleston). The fact that both of these men are eager for Juliet’s approval helps to initiate some of the more disturbing choices in the film.
In the opening sequence of the film we watch the judgmental and cruel manner in which the trio interrogates candidates for a fourth roommate, finding fault with all who apply. Only a mysterious man named Hugo (Keith Allen) is allowed to be considered without judgment, at the convincing of Juliet. Although the immature Alex is clearly jealous, the new tenant is permitted to enter and this attracts a unique situation for the three friends.
The film was originally to be called Cruel, which is a fitting title for a story with no likeable characters to be found. Even more interesting is the manner in which the characters are altered and changed by the events that take place. There is no clear protagonist to root for, and the less despicable characters are not necessarily the ones which end up on top. The screenplay by John Hodge is difficult to predict, taking the audience on an unexpectedly gripping conclusion in which friends and roommates can no longer trust each other. Director Boyle, screenwriter Hodge and producer Andrew Macdonald would reunite again to create Trainspotting a few years later.
The Blu-ray release of Shallow Grave comes with a newly restored digital transfer, supervised by director of photography Brian Tufano. There are two optional commentary tracks; one director’s commentary with Boyle and another with Macdonald and Hodge. The special features also include new interviews with cast members, though the highlight remains the 1993 making-of documentary by Kevin Macdonald, Digging Your Own Grave. Kevin and Andrew Macdonald also filmed the process of selling the script in 1992 at the Edinburgh Film Festival, which is included. The insert booklet includes and essay by film critic Philip Kemp.