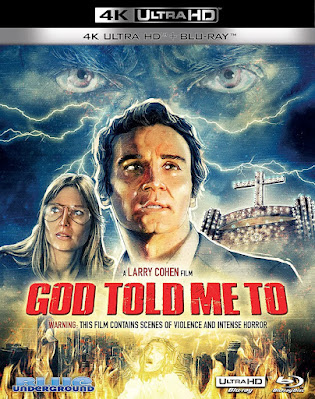 In the 1960s Time Magazine released two issues discussing the end of religion, including a bold cover that asked the infamous question “Is God Dead?” Moving into the 1970s, there was a surge in alternate religions including The Church of Satan and several pagan movements. As a result, there are multiple horror movies released in the ‘70s which are centered on these themes of religion. Controversial director Larry Cohen (It’s Alive, The Stuff) joined the conversation with God Told Me To, a movie that begins as police procedural and slowly becomes a descent into madness and religious paranoia.

The beginning of the film is timelier than ever, in an upsettingly frightening way. After a rooftop sniper guns down 14 random pedestrians on the streets of New York, he tells police “God told me to,” before committing suicide by plunging to his death. This is followed by multiple similar incidents, including a husband and father killing his own family and a cop going on a killing spree amidst a crowded St. Patrick’s Day Parade. Catholic NYPD detective Peter J. Nicholas (Tony Lo Bianco) investigates the occurrences, finding a connection between them all in an androgenous young man seen speaking to each of the culprits before their violent outburst.

What begins as a film about potentially religiously driven homicides takes a turn into the supernatural and extraterrestrial. While this sounds outlandish and a bit campy, the execution is handled with more seriousness than expected. I wouldn’t have minded seeing Cohen lean into the wacky concept a bit more, rather than the somber affair hanging over much of the film. Even with a few memorable sequences, God Told Me To fails to reach the memorable level of campiness found in It’s Alive, while also having little to actually say about religious extremism.

The 4K Ultra HD release of God Told Me To from Blue Underground also comes with a Blu-ray disc copy of the film. The 4K presentation is crisp and clear, with a deep range of colors, despite the film being over 40 years old. The special features on the disc include the following: