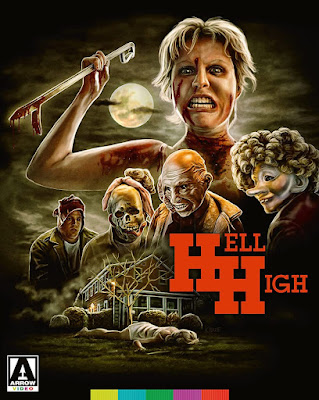 Hell High is a unique horror movie combining elements from multiple sub-genres. There is an inciting incident often seen in the creation of a slasher monster, but this doesn’t occur until decades later when a home invasion and attempted assault triggers a rape revenge narrative. And the home invaders also wear masks often associated with the slasher genre, making it difficult to categorize this film down. It is difficult to pin down who the victim and who the villain is, and that is part of what makes Hell High a fascinating enigma, if not a particularly great film.

Hell High was a true low budget horror movie, shot in 18 days in 1986, though it wasn’t released until 1989. As the sole film from director Douglas Grossman, Hell High begins with a prologue in which a young girl named Brooke Storm (Amy Beth Erenrich) witnesses an aggressive sexual encounter between two delinquent teens (one of which was played by the film’s stunt man, Webster Winery). The delinquents briefly terrorize Brooke by damaging her beloved doll, and the young girl retaliates as they attempt to leave on motorcycle, resulting in a tragic accident that traumatizes Brooke.

Though she has left this incident behind as an adult high school teacher (now played by Maureen Mooney), Brooke is triggered when a group of her problem students retaliate against the strict educator by terrorizing her at home, they end up biting off more than they can chew. First the teens wearing Halloween masks simply harass Brooke from outside her home, but things escalate when they break into the home and begin to threaten rape.

This invasion and assault brings something out of the traumatized teacher, resulting in a violent revenge and deviation from traditional slasher formulas. The resolution of Hell High is as confounding as it is rare within the slasher genre, allowing the survival of an unlikely character. I wouldn’t call Hell High a good film, but it is a fascinating one to discuss in the tradition of both the slasher and rape revenge narratives, along with being an early example of home invasion horror.

The Blu-ray release is a welcome improvement on prior versions of the movie available on home video (or streaming), featuring a high-definition presentation of a new 2K restoration from the original camera negative approved by cinematographer Steven Fierberg. There is also uncompressed stereo audio, and a package with newly commissioned artwork by Ralf Krause, along with the original artwork on the opposite side of the reversible sleeve. The package also comes with a booklet containing stills from the film, cast and crew info, and an interview with stunt coordinator Webster Whinery.

Special features on the disc include the following: