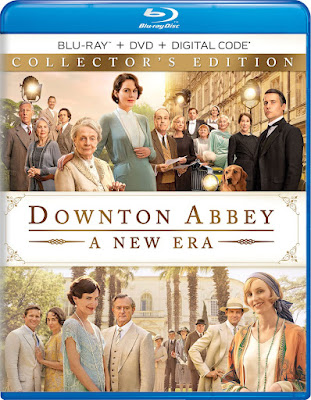 When Downton Abbey began airing in 2010, it became a surprise hit amongst audiences. Audiences eagerly awaited new episodes of the historical drama set on the fictional Yorkshire country estate of Downton Abbey during the early 20th century without the need for action or excitement. While there was some spectacle in the setting and immaculate period clothing, Downton Abbey’s primary selling point was the characters and the slow-burn development of relationships. As the show ended, fans had a feature film to look forward to, and three years later we have the follow-up with Downton Abbey: A New Era. Although the sequel film doesn’t break much new ground, despite the title, it is a welcome return and an excuse to spend more time with beloved characters.

While the show often depicted everyday life in Downton Abbey, primarily focusing on the relationships between the aristocratic Crawley family and their domestic servants, the movies have had to be more plot driven. The first Downton Abbey film followed a royal visit to the Crawley family's stately home, complete with an assassination attempt, while A New Era separates the characters as some of the Crawleys take a French vacation while the others remain at the estate as a film crew uses the location for movie shoot.

The reason for the trip to the south of France is Violet Crawley (Maggie Smith) discovering a former lover has left her his estate with his passing. She is joined by her son Robert (Hugh Bonneville), who begins to question the possibility of an unknown brother. This melodrama plays out as Lady Mary Talbot (Michelle Dockery) stays behind at Downton Abbey to welcome director Jack Barber (Hugh Dancy) and becoming involved in the production when sound is suddenly required in his film. This brings a series of obstacles that feel as though they have been lifted from the plot of Singin’ in the Rain, sans music.

This drama plays out with a number of relationships developing. With Mary’s husband Henry missing from the picture (as Matthew Goode was unavailable to appear in the film), there is a flirtation between her and Jack, though this is not nearly as engaging as the relationship developed between head butler Thomas Barrow (Robert James-Collier) and movie star Guy Dexter (Dominic West). The film production also provides Joseph Molesley (Kevin Doyle) with new opportunities as he is hired to write dialogue, bolstering his confidence enough to pursue his own romantic interest.

Downton Abbey: A New Era is simply a continuation of what has come before, despite several new storylines. Enjoyment of the film is entirely dependent upon the enjoyment of the show and past film. This is neither compliment or criticism, however. I was glad to spend more time with these characters and felt A New Era did them justice but can’t imagine it will make new fans of the show.

The Blu-ray release of Downton Abbey: A New Era also comes with a DVD and digital copy of the movie, along with a handful of fan-service special features. There is a making-of featurette and several additional promotional featurettes. The best of the extras is a feature commentary track with director Simon Curtis.