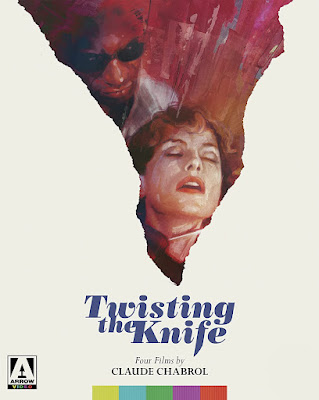 Claude Chabrol was a highly significant name in French cinema for half a century, even contributing to the legendary Cahiers du Cinéma during its peak in the 1950s. Among these contributions was a critical analysis of Alfred Hitchcock’s work (co-authored by Eric Rohmer), which clearly influenced his own filmography throughout his career. When he wasn’t attempting to imitate the murder mysteries of Alfred Hitchcock, Chabrol was often focused on the depiction of upper-class lifestyles, which is a commonality between each of the films in this collection.

Twisting the Knife is a limited-edition box set that includes four films from Chabrol. Though the French director has been making films since the late 1950s, all of the movies included in this set come from the late 1990s and early 2000s. This small sample shows a consistency in the later years of his filmography, both in style and subject matter. Along with high definition presentations of each film, three of them were given a new 4K restoration. Contained in a box with newly commissioned artwork by Tony Stella, there is also an 80-page collector's booklet with new writing by Sean Hogan, Brad Stevens, Catherine Dousteyssier-Khoze, Alexandra Heller-Nicholas, and Pamela Hutchinson on the filmmaker’s work, as well as the cast and crew info for each film. This is the second box set of Claude Chabrol’s work, following Arrow Film’s release of Lies andDeceit.

The first film in the collection is the closest thing to a genre picture, along with the clearest homage to the work of Hitchcock. The Swindle (Rien ne va plus) is a 1997 lighthearted thriller about two small-time con artists who take on their biggest score, which raises the stakes with all types of unexpected dangers. Betty (Isabelle Huppert) is the youthful partner to veteran con man Victor (Michel Serrault), who begins to question the loyalty of his cohort when she comes up with a plan to swindle a financial courier (Cluzet again) carrying a large sum of money. Filled with the paranoia of Torment and many instances of selfish betrayal seen in Betty, The Swindle is also far lighter in tone. The countless double crosses within the narrative come off as far more fun since each of the characters are self-serving thieves.

The Color of Lies

The Color of Lies (Au cœur du mensonge) is a 1999 psychological mystery involving the death of a young girl in a small seaside town. Because art teacher René Sterne (Jacques Gamblin) was the last to see her, the town quickly turns their back on him, even though the investigating officers doubt his involvement. The new chief of police Frédérique Lesage (Valeria Bruni Tedeschi) is thrown into a community she knows little about while investigating the murder. The investigation turns into an exploration of the unique small town world, and eventually leads to television journalist and minor celebrity Germain-Roland Desmot (Antoine de Caunes), who René suspects is having an affair with his wife (Sandrine Bonnaire).

The 2000 film Nightcap (Merci pour le Chocolat) is what you might have gotten from Alfred Hitchcock’s Rebecca had it been a comedy. There is a mystery at the center of the film, but the reveal comes as less of a surprise as the casual manner with which the film’s murderous culprit justifies and dismisses these evil actions. Even the revelations of criminal insanity are not enough to disturb the pristine veneer of upper-class wealth.

The film begins with the highly publicized remarriage of a famed concert pianist to his second wife, Mika (Isabelle Huppert), after the death of his third. André (Jacques Dutronc) also has a grown son from his first marriage named Guillaume (Rodolphe Pauly), who appears to get along well with Mika. Despite the remarriage, their life seems to already be in a comfortable routine until a surprise visit from a young woman born on the same day as Guillaume and nearly switched with him at birth due to a similarity in last names. Even when we know where the film is headed, it is a devious treat to enjoy because of Huppert’s captivating performance. This makes what might have otherwise been an underwhelming film into something wickedly enjoyable.

The Flower of Evil

The Flower of Evil (La fleur du mal) is a 2003 suspense film that begins with a scene introducing a murder scene, but flashes back before giving the audience any context. It is easy to forget a murder will even occur as the narrative switches to family melodrama. François (Benoît Magimel) returns to the successful family after a period in America, and quickly begins a romantic relationship with his stepsister Michèle (Mélanie Doutey). Michèle’s mother Anne (Nathalie Baye) married François’s father Gérard (Bernard Le Coq) after the death of her first husband, who also happened to be Gérard’s brother. This is just one of many skeletons in the family closet, with Gérard’s sister (Suzanne Flon) also rumored to have killed her own father. Although there are multiple deaths discussed and one murder seen onscreen, The Flowers of Evil is much more concerned with the privileges afforded the upper class family, including evading punishment for crimes.