My Afternoons with Margueritte Blu-ray Review 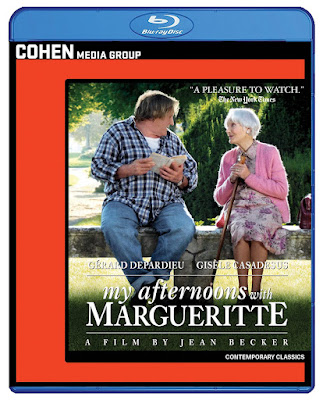 My Afternoons with Margueritte takes the type of feel-good narrative expected to come from Hollywood but approaches it with a European sensibility. There are no big emotional speeches or contrived relationships. Everything feels grounded and lacking the melodramatic trappings one might expect. Even when sad or tragic events occur, they are handled with subtlety and play in an understated manner.

Gérard Depardieu carries the film as Germain, a simple-minded aging man living in a small French town. Germain often has his intelligence ridiculed by the locals, as he has remained nearly illiterate following a difficult childhood being criticized by teachers and his abusive mother. Even though he has a loving younger girlfriend (Sophie Guillemin) and is friends with many of the locals, it isn’t until Germain has a chance encounter with an older woman that he starts to believe in himself.

Margueritte (Gisèle Casadesus) is a 95-year-old lover of literature, who spends her free days on a park bench where she meets Germain. After the unlikely pair strike up conversation, Germain is inspired to develop intellectually. Margueritte inspires him to start reading while Germain provides her with the friendship she has been missing. Suddenly Germain’s interactions with the locals that have always thought him a fool begins to change as well.

At only 83-minutes, My Afternoons with Margueritte can feel somewhat slight. It is an enjoyable film with well-developed characters, but the plot is overly simplistic. There isn’t much time to develop real conflict so much as establish context for the character choices. This doesn’t make it a bad film, but it also doesn’t make it memorable beyond a pleasant viewing.