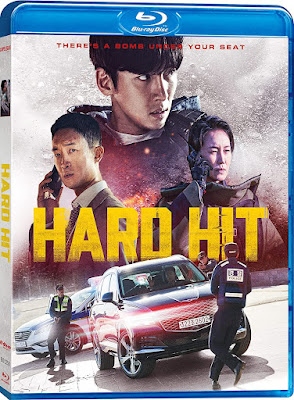 Hard Hit is a remake of Retribution, Dani de la Torre’s 2015 Spanish thriller, but the story transplants easily into South Korean culture. There have been a number of revenge-themed thrillers in Spanish cinema in recent years, though South Korea still seems to have the strongest hold on these themes. Along with being a remake, the premise shares similarities with a few American thrillers, like Speed, Vehicle 19, and Cellular. It should also come as no surprise that Hollywood also has plans to remake Retribution with Liam Neeson in the lead.

The film follows VIP Bank Manager Lee Sung-Gyu (Jo Woo-jin) as he begins what is a seemingly ordinary day, only to discover a revenge plot planned against him. After getting his daughter Hye-in (Lee Jae-in) and son Jung-ho (Jeon Seok-ho) in the car to drop them off at school before heading to an important meeting, Lee receives a blocked phone call from a mysterious cell phone found in the glove compartment. The caller claims that a bomb underneath the car seat will explode if anyone attempts to leave the vehicle or authorities are contacted.

The mystery involving the unknown caller and their reasons for the plot unfold throughout the run-time, with plenty of opportunities for thrilling action sequences along the way. It is an extremely basic set-up, which puts a lot of pressure on the execution. As is often the case with South Korean cinema, the strength lies more in the emotional core of the narrative than the action itself. The action is more suspenseful because filmmaker Kim Chang-ju is able to develop a relatable dynamic between the characters. In particular, the emotional core of the narrative is tied to the relationship between Lee and his daughter, who is old enough to step up and help her father through the crisis.

While the film could have had a bit more action and provided more developed relationships between the family in the script (as opposed to just the performances, which are undeniably effective), I can’t say I didn’t enjoy Hard Hit. It was an easy view, if only just a bit forgettable. The good news is that I could likely watch it again in a few years (or when the remake is released) and have a relatively decent viewing experience. It is no masterpiece, but sometimes a tight and efficient thriller is enough for a night’s entertainment.

The Blu-ray release of Hard Hit comes with a making-of featurette, along with a theatrical trailer.