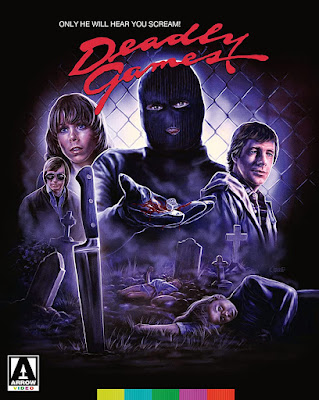 The 1982 slasher Deadly Games begins like many others of its type, with the murder of a nubile young woman at the hands of a masked killer. Unfortunately, it is pretty much downhill from there. After an intense opening sequence, the narrative becomes more preoccupied with the bed-hopping going on with the local married couples. When the sister of the initial victim shows up, her efforts to find the killer are put on hold while she becomes entangled in the romantic sub-plots that threaten to take over the film. With too few kills to be a satisfactory slasher, and too obvious of a mystery to work as a whodunnit, Deadly Games is mostly a deadly bore.

Keegan (Jo Ann Harris) wasn’t close with her sister, but still drops everything to intrude on her murder investigation. Rather than getting too preoccupied with the tragedy of her sister’s death, Keegan quickly becomes enamored with a cop named Roger Lane (Sam Groom), who is investigating the crime. Roger also co-owns the local movie theater with the reclusive projectionist Billy Owens (Steve Railsback), a man even the locals are creeped out by. The pair are obsessed with horror movies and have even created a board game with a horror movie theme. The killer is seen playing this game before each kill, limiting the options of who is under the mask.

All of this has the makings of a good slasher, however derivative much of the plot is. The problem is that writer/director Scott Mansfield doesn’t put enough emphasis on the horror violence expected from slashers. And by revealing early on that the killer must be one of two men, it doesn’t result in much of a mystery. Once the actual killer is revealed, the film ends abruptly and without resolution. This wouldn’t have been so much of a problem if the narrative hadn’t dragged so much to get to the resolution. It is all build up after the initial opening sequence, and the payoff simply isn’t enough.

There is some campy enjoyment to be found in the film, particularly in the odd way the characters behave. Despite her sister being recently murdered by an intruder, Keegan has little reaction to Roger regularly breaking into the same home to see her. In one hilarious sequence, she is more concerned with the fact that her hair doesn’t look good than the fact that he is waiting for her in the dark. An extended montage of a three-way date between Roger, Keegan, and Billy is also unintentionally hilarious.

The Blu-ray release of Deadly Games from Arrow Films features a brand new 2K restoration from the original camera negative, and the original lossless DTS-HD Master Audio. The package features a reversible sleeve with the original poster on one side and new artwork from Ralph Krause on the other. The special features on the disc itself include:

-       Original screenplay under the title Who Fell Asleep [BD-ROM content]