A Journal for Jordan Blu-ray Review 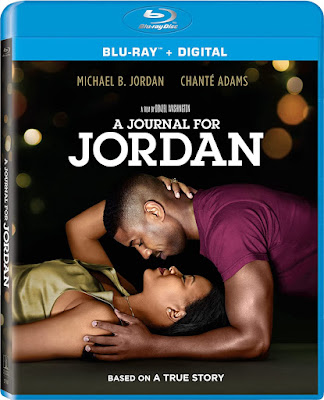 When it comes to filmmaking, good intentions are rarely enough, and A Journal for Jordan is a spectacular example of that. Based on Dana Canedy’s memoir A Journal for Jordan: A Story of Love and Honor, the film follows the former New York Times journalist’s romance with 1st Sergeant Charles Monroe King. While the true story is showed respect in the efforts to adapt it into a movie, this often comes at the expense of good filmmaking.

Chanté Adams stars as Canedy in the non-chronological depiction of her romance with King (Michael B. Jordan). Despite their differences, Canedy and King begin a relationship after meeting at her parent’s house. Rather than give us extraneous details, the films remains zeroed in on the romance, often at the expense of any other story elements. Despite the narrative addressing the events of 9/11 and the war in Iraq, they are merely included to add context to the dynamic between the pair. King’s war efforts aren’t depicted in any way that doesn’t impact Canedy, which can feel off-putting. I’m sure the relationship was Canedy’s main priority in the storytelling, but that doesn’t mean it is the most interesting aspect of King’s story.

The retelling of the relationship between the journalist and soldier is respectful to the point of being uninspired. The screenplay by Virgil Williams sanitizes the story to portray King as something of a saint, but that doesn’t make for an engaging or interesting film. While the family members of the departed may praise this portrayal, those who didn’t know the deceased are more likely to be disappointed by the lack of depth in the material.

Most who decide to watch this film are likely doing so because of the director and star. That would be a mistake. None of the content in A Journal for Jordan comes close to other films directed by Denzel Washington. This doesn’t feel like a movie made by anyone with credits outside of the Lifetime Channel. And although Jordan is serviceable in the supporting lead role, even he seems to be uninspired by much of the dialogue given to him. Most of the performance feels subdued, to the point of feeling flat.

The Blu-ray release includes a handful of special features reinforcing what was most important to the filmmakers. There is a making-of featurette, a feature about the journal, and one about Charles and Dana. It is clear that there was more emphasis put on the respectful depiction of the real people the movie is based on than what would make a good film. Unfortunately, it isn’t just the narrative that is short of spectacular. The high definition presentation makes the film’s budget apparent as well, with shortcomings in the cinematography exposed. The special features also include deleted scenes and a gag reel.