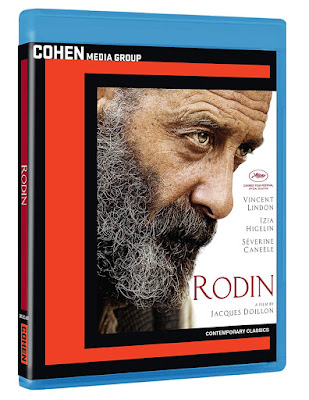 Along with last year’s Final Portrait, Stanley Tucci’s bare-bones adaptation of James Lord’s memoir from his encounters with artist Alberto Giacometti, Rodin seems to solidify a trend in the depiction of the creative process of artists in progress. Often painfully monotonous and undeniably obsessive, these films do not make the life of an artist out to be glamorous, though indulgence seems to be key. Although the narrative of Rodin covers the crucial years of Auguste Rodin (Vincent Lindon), beginning with his rise to fame in his 40s, there is far more consideration given to his personal/romantic relationships.

With a heavy emphasis on elliptical editing, Rodin jumps forward in time from sequence to sequence, though there are two things that remain constant within the progression in history: Rodin’s obsession with his work and with his lover, Camille Claudel (Izïa Higelin). These two things often even happen simultaneously, as Camille works under the sculptor as a protégé, much to the frustration of Rodin’s wife. During this period he creates his most famous works, including “The Gates of Hell” and “The Thinker,” but it is his struggles to complete a statue of Balzac which takes up much of the film.

When he isn’t working on that statue, which was never fully accepted in his lifetime, Rodin struggles to maintain a relationship with Camille when she realizes that he will never leave his wife, Rose (Séverine Caneele). This makes much of Rodin an exercise in futility and repetitious monotony. Regardless of the passage of time, little seems to change within the narrative. Rodin continues to struggle to complete Balzac’s statue while Camille feels underappreciated, all the while a constant parade of nubile female models parades through the workshop. Often these models also serve as distraction from Rodin, both from his home life and the lover/protégé that he inevitably loses.

At first it feels as though writer/director Jacques Doillon (Ponette) is attempting to show the struggle of Rodin’s creative process through the monotony and repetition of his work, but the way that the narrative jumps forward in time also seems to contradict this effort. The result feels like a collection of moments, none of which offer insight to a larger purpose. Rodin is ultimately a character study, but one in which the subject doesn’t seem to change or develop much throughout the run-time, regardless of how quickly Doillon decides to jump forward in time.

The Blu-ray release of Rodin is not treated with many extras, but this shouldn’t be surprising considering how poorly the film was received upon its release at the Cannes Film Festival this past year. There is a featurette entitled “Sculpting Rodin,” which is 30-minutes and includes interviews with the director. There is also a theatrical trailer and an insert with production photos and the cast list.

Thoughtful blog, thanks for sharing