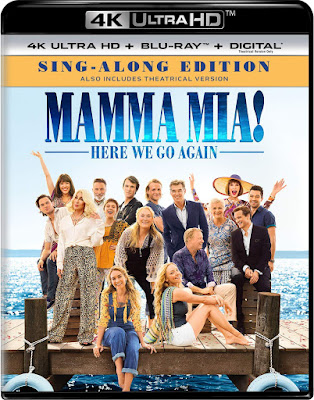 Mamma Mia! Here We Go Again is a shameless excuse to shoehorn more ridiculous over-the-top renditions of ABBA songs into a near non-existent story. That’s it. There is no need to consider this film’s artistic merits, because the filmmakers didn’t make this effort. This movie is a self-indulgent cash-grab, and one that effectively capitalized on an often neglected audience demographic. It is the same reason that faith-based films continue to thrive in the box office, regardless of quality, But the Mamma Mia sequel is far from a Christian film, this time allowing us to see the flashbacks of Donna (played by Lily James) as she sleeps with three men in a row.

This might be a little more unsavory if it weren’t for the casual manner with which the film addresses every situation. Everything about the film is frivolous and inconsequential, so much that it is impossible to be offended, even when the male characters are treated as nothing more than worshipers at the feet of women. And as badly as they still dance, it is not surprising that this is where they have been delegated, their fame a comparable stand-in for the beauty that has made most female stars little more than a prop since the beginning of cinema. But it is one thing to make a female-centric narrative, and it is another thing to make a movie that is actually good, or at least watchable. Mamma Mia! Here We Go Again is a movie for people who don’t like movies.

The plot is extremely simple, because there isn’t much of it, and most of that just rehashes the same story from the first time around. Instead of just hearing about Donna’s young sexual escapades in the Greek islands, we actually see them. This occurs alongside a continuation of her daughter’s story. Sophie (Amanda Seyfried) has remained on the island, tied to her deceased mother, even though her husband (Dominic Cooper) has a successful career in New York. That is about it. If this doesn’t feel like enough story to fill a film, consider the fact that every other scene is a musical number that was not written for this film, and therefor never advances the plot in any way. And those of you wondering about the highly advertised inclusion of Cher as Sophie’s grandmother should know that it also doesn’t do anything for the story, and she only appears to sing a few songs at the end of the movie. It is a cameo as pointless as the film.

Perhaps I should spend more time talking about the film itself, but I’m still annoyed by the time lost watching it. The disc itself has been given the treatment one would expect from a franchise looking to bleed its loyal fans dry. Released on 4K, the gorgeous Croatian filming locations are enhanced by the vivid colors of the format, at least for the scenes actually shot on location and not just a studio set in England. The package has also been released as the “Sing-Along Edition” (with the theatrical version also an option), clearly aware of what type of people like these obnoxious bits of fluff.

The special features on the disc also include additional musical sequences, along with extended versions of existing ones. There are also featurettes about some of the technical aspects of the film, mostly focusing on the costumes and the actors involved. There is also plenty of promotional materials, even going so far as to include a talk show interview Cher did. I’m sure all of this will be of interest to someone, but clearly I am not that person.