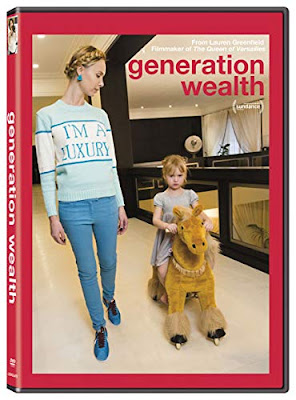 It is ironic that in creating a documentary about the narcissism of the entitled and wealthy, filmmaker Lauren Greenfield chooses to make herself and her family a part of the conversation. Fragmented doesn’t even begin to describe the film, jumping around from theory to theory about the wealthy, Greenfield is more concerned with shoehorning herself into the discussion than any thoughtful consideration. One gets the impression that despite being a documentary about the character flaws of the wealthy, Generation Wealthy is mostly just an excuse for self-promotion.

If this were merely an unbiased consideration of wealth in America, there would be plenty to discuss within the documentary, and yet the real reason for Greenfield to look at the subject seems directly tied to a group of photographs she previously took. In considering the image-obsessed culture, Greenfield simply feeds the flames by giving these damaged individuals the spotlight that they desire when obsessively spending money. She is also far more preoccupied with the significance of her own work than the fact that they make her something of a hypocrite.

The film itself also does the same, because it is clearly ego that has led to Greenfield’s decision to make herself and her family a main subject of the documentary about extreme wealth, despite clearly belonging to the upper middle class. At one moment we are considering why the wealthy make the absurd decisions/purchases that they do, and the next we are forced to consider the parental choices of Greenfield, including endless shots of her children annoyed by the fact that she constantly shoves a camera in their face. The fact that she interviews her teenage son about issues of wealth and beauty despite having no expertise or connection beyond being related to the filmmaker is perfect example of the way that narcissism ruined this documentary, which is even more ironic considering that this is the judgement Greenfield often makes of her wealthy subjects.

Easily the most contradictory and structurally unsound documentaries I have ever seen, Generation Wealth ultimately has nothing new or significant to say about the subject. At times it touches upon interesting topics, such as the constant pursuit of youth by those with money to obtain it, but ultimately gets distracted by Greenfield’s insistence upon making herself the center of attention. More than anything, this documentary simply feels like a cheap excuse for Greenfield to show off her photography in an obvious effort of self-aggrandizement. In the future, Greenfield would be better off just creating an Instagram account and going to therapy with her kids instead of making a movie like this.

The DVD release includes more self-serving promotion, with the only special feature being a collection of photos by Greenfield. This documentary was really only a few steps away from being an autobiography, which is obnoxious considering what the subject was intended to be.