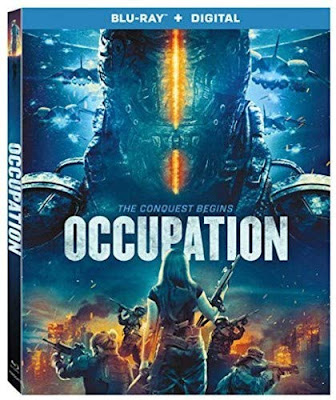 For those who haven’t had their fill of Hollywood blockbusters and don’t want to wait until next summer for more mindless entertainment, the Australian film industry has begun to follow suit. Although they are not the only national cinema to imitate America’s money-based industry of spectacle, the shared language makes the Australian film industry and natural one for easy import. While most foreign films are thought to bring American audiences respite from the typical special-effects-driven narratives, Occupation embraces them.

Calling Occupation derivative would be an understatement, but also seems to be a label that the film does not avoid. Nothing about the narrative is attempting to revise the tired alien invasion film (even the character design for the bug-eyed aliens feels comically cliché), with far more time spent on special effects than the screenplay. This is most apparent in the character development, or lack thereof. Despite an ensemble cast of characters, all banded together in the seclusion of their small town when the widespread attacks begin, their interactions are a weird blend of cheap melodrama and forcefully buoyant humor. There are relationships within the film, between family members and romantic partners, but they all feel like perfunctory filler between the scenes of sci-fi action.

If you enjoyed Independence Day and War of the Worlds, but longed for the characters to be even more wooden and a narrative with more limited scope, Occupation is the film for you. It was successful enough to warrant the production of a sequel, but I can’t imagine any of the human characters are reason to continue the narrative. I imagine the focus of the sequel will be to improve on the focus of the original, which is clearly the special effects above all else.

The Blu-ray release of this Australian alien invasion film comes with a digital copy of the film, which is the closest thing the package has to special features. Considering all of the background actors were unpaid volunteers, it would seem that the production had to get creative in order to achieve its vision. This is the kind of stuff that makes for great making-of featurettes, which are unfortunately absent from this release.