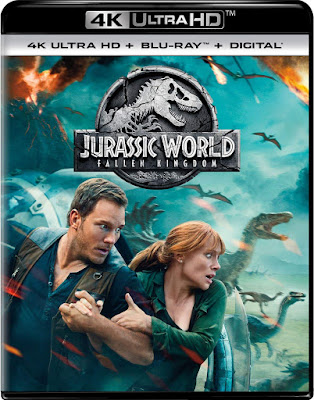 The intelligence of the latest sequel comes at a price, however, and the escapist elements have been decreased in order to make room for deeper discussion. There are still plenty of dinosaur dangers, along with the extremely exciting aforementioned active volcano sequence, but it is not as mindless or as mean-spirited as Jurassic World. Unfortunately, much of the charm is also gone, and the banter between Chris Pratt and Bryce Dallas Howard is often more irritating than endearing. Claire (Howard) tracks down Owen (Pratt) to help save some of the dinosaurs from the extinction that an active volcano on the island will ensure, if they aren’t helped. Because of Owen’s deep connection to Blue, one of the velociraptors that he trained, he agrees to help.

As is always the case with a mission leading to an island of dinosaurs, everything goes wrong. This is the one constant throughout every one of the films, so it is no surprise that Fallen Kingdom offers the same, even if it is the humans who are more untrustworthy this time around. That is a shift that began with Jurassic World, which began to see some of the dinosaurs as good guys, while others became even more horrifying villains. The worst of the dinosaur villains has been replaced with villainous humans, though the good dinosaurs only become more ridiculously heroic in this sequel.

In a lot of ways this film feels as though its greatest purpose is simply to set up the evolution of the franchise. By the end of the movie, a majority of the content begins to feel like filler that is anticipating the next installment more than it is taking advantage of the narrative within the current one. Still, I would choose this over the mindless rehash that was Jurassic World, at least for the attempt at something more thought provoking.

The 4K Ultra HD presentation of the film is best appreciated during the volcano eruption sequence. This is the film’s high point, despite taking place in the first half. The only criticism to be made is that it is possible that the colors of the lava are too vibrant in 4K (nearly to the point of being cartoonish), although I remember thinking the same of the visuals in the theater, so it is likely more of a CGI issue than it is one of the film’s presentation.

The 4K package also comes with a Blu-ray and a digital copy of the film. The special features are included on both the 4K disc and the Blu-ray, and there are a lot of them. There are a series of on-set video journals created by Pratt (about 12 minutes worth), as well as a seemingly endless stream of featurettes, even if most are simple promotional ones about a few minutes each. There is a featurette about the chemistry between the stars, ones about the filming location of Hawaii, the addition of new dinosaurs, and the continuation of the narrative, and more. There is no shortage of content, even though little of it digs beneath the surface.