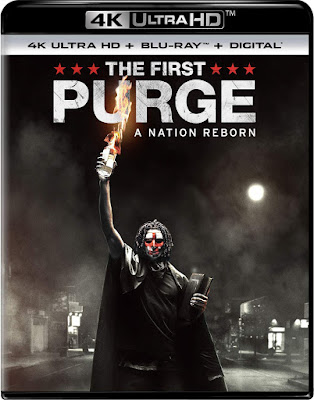 With none of the main characters from the previous movies returning, The First Purge relies heavily on the established structure of the films. There is a lot of buildup and many character introductions before the carnage starts, especially since this is the very first. Established as a social experiment taking place on Staten Island, there is plenty of discussion about the purge, allowing for conspiracy theories and accusations of fake news. Basically, all of the people who are too poor to leave town before the purge are convinced that the event is simply a way to eliminate lower class citizens. And in this film, lower class also equates to being a minority.

The difficulty with the film’s representation of its lower class characters is the somewhat contradictory way that they utilize the basest of stereotypes. Many of the innocent characters in The First Purge stay in the city to protect someone they love or out of desperation because of the cash reward for those citizens willing to participate. But the most heroic of the characters ends up being a drug dealer named Dmitri (Y’lan Noel) who is somehow shown to be a moralistic defender of the community that he profits off of. The logic of this is certainly questionable, but it is a representation easier to defend than the crazed psychopaths who fully embrace the violence of the experiment. In the end, it would seem that lower income areas are full of sinners, saints, and psychopaths.

Although the first film was clearly a home invasion horror film, the franchise has veered more and more towards horror action in recent installments. There may be a more pronounced embellishment of the violence and gore than your typical action movie, but there are also far fewer scares than many might hope for from a straightforward horror film. The First Purge is far more interested in social commentary and thinly veiled digs at the current administration than it is in cheap scares.

Though it is shot in a way that is often unsettling, the way a horror movie should be, The First Purge is also surprisingly colorful and vibrant at times. This comes across magnificently in 4K Ultra HD, as do the deeper blacks in the night sequences. I only wish that I cared for the film more, because the 4K treatment is rather impressive. The package comes with a Blu-ray copy of the film also, which is the disc that also has the special features. There are three promotional featurettes and a handful of deleted scenes, which are pretty underwhelming. A digital copy of the movie is also included with the two discs.