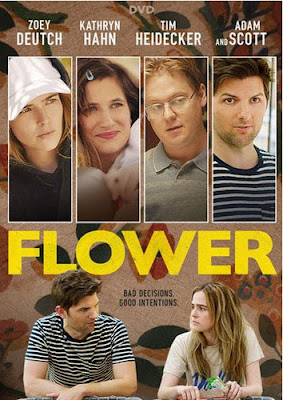 Flower sold itself as a coming-of-age film, albeit one that’s primary goal seems to be creating a protagonist whose amoral behavior is intentionally shocking. But as transparent as this character development may be, it does little to prepare the audience for a complete shift in tone and story in the final act. Flower isn’t one movie, but two crammed into the same narrative, and the really sad thing is how completely it manages to fail at both of them.

This is yet another film that would like to make the argument that men are allowed to behave sexually in a way that women are judged for, but the role of Erica (Zoey Deutch) would be obnoxiously immoral regardless of gender. I actually find it more offensive to suggest this kind of behavior would be acceptable of anyone, and am positive that the cruelty of Erica’s character would never be accepted in the form of a male protagonist. It is only considered acceptable for a female under the mistaken belief that this is somehow equivalent to feminism.

Mostly, however, Flower tries desperately to be shocking. Like Erica, the film seems to think that is the only way it can get any attention. Unfortunately, that just makes the movie memorable as one of the worst I’ve seen this year. Nearly every filmmaking decision is the exact opposite of good taste, which may make it memorable, but certainly not in a good way. Although blow jobs take up an unnecessary amount of the film’s dialogue, the story is more focused on Erica’s foul attitude towards her mother’s boyfriend (Tim Heidecker) and his emotionally disturbed son, Luke (Joey Morgan).
When Luke moves in with them, Erica’s first response is to offer him a blow job, unsurprisingly, despite their parents being engaged. After that, she uses him in order to get close to an older man (Adam Scott) she has been lusting after at the bowling alley. The catch is that this man is also a former elementary teacher that Luke accused of sexually assaulting him as a child. Erica says that she plans to trap and blackmail him, like every other older man she has entrapped, but her lustful desires inevitably get in the way of punishing a man who is supposed to be attracted to young boys. This is only one of numerous gigantic gaps in logic and plot holes contained in the sloppy screenplay, written by three men, I might add.

It isn’t the most forgettable film of the year, but Flower is the one I hate the most. The DVD only contains a commentary track with Deutch and director Max Winkler (son of Henry Winkler), another example of nepotism mattering more than talent. It is unfortunate that Deutch was attached to this film. Already too old to believably play seventeen, Deutch also deserves much better than this script, and this character that was written in a vacuum by a group of men trying to imagine what teenage girls sound like.