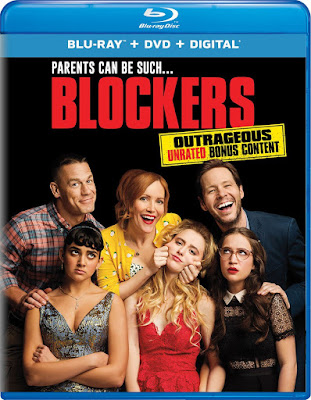 Blockers does manage to address the female side of this milestone in a way that feels more sincere and realistic than comedies such as The To Do List, and it does this by casting actors that actually look like teenagers. Not only do they look the right age, but they also act like typical teenagers, graciously avoiding the usual Hollywood urge to sexualize or objectify any and all female characters involved in sex. And it makes sense that these girls aren’t objectified, because we spend a great deal of the film with their parents, who still see them as the little girls they raised.

As they prepare to graduate from high school, three lifelong friends make a pact to lose their virginity on prom night. Julie (Kathryn Newton) is the one to come up with the idea, as she is in a committed relationship with a boyfriend she cares about deeply. But Kayla (Geraldine Viswanathan) agrees to the pact because she just wants to get it over with, and picks the first random guy that she sees to take as her date. Sam (Gideon Adlon) goes along with the pact and finds a male date, despite secretly hiding her true sexuality from friends and family alike.

Friends since childhood, the parents of these three girls are also close, especially Julie’s mother, Lisa (Leslie Mann), Kayla’s father, Mitchell (John Cena), and Sam’s father, Hunter (Ike Barinholtz). These three are together when their daughters go off to prom together and also when they accidentally find out about the sex pact. Countering the realistic way that the teenage relationships are handled is the over-the-top slapstick hijinks of these three parents as they unsuccessfully attempt to track their daughters down before the pact is complete.

As much as I appreciate the modern twist on an old genre convention, it is the subtlety of Blockers which makes it a winning film. Sure, there is some discussion about the gender differences when it comes to sexuality, but the film knows better than to bash the audience over the head with agenda-driven dialogue. There is just enough to make the film relevant without weighing it down, allowing a balance in the views and variety in characters and their motivations.

The Blu-ray release of Blockers also comes with a DVD and a digital copy of the film. The special features on the actual disc include a handful of additional footage. There are only three deleted scenes, and all three are less than three minutes long all together. More entertaining is the alternate lines and the gag reel, and there is far more of this extra footage. There are also four behind-the-scenes/promotional featurettes, although more amusing are two additional ones that are a bit more creative. One has John Cena showing a prom survival kit for parents, and the other has Ike Barinholtz giving a brief history of sex. The final extra is a commentary track with director Kay Cannon.