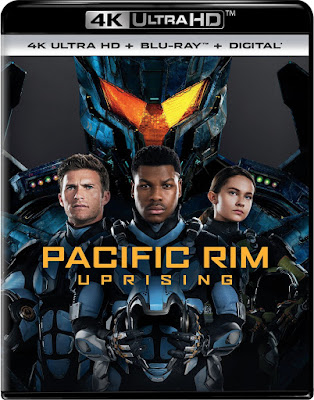 Some sequels are never asked for, because the original was never so loved that it demanded more screen time. But Pacific Rim Uprising doesn’t feel like a sequel, despite a few minor characters returning. Instead, it feels like a complete reboot of the idea, complete with new protagonists and focus shifted even more towards escapist entertainment. And one would also have to be extremely naïve not to realize the extent that Pacific Rim Uprising is tailor-made to be exported to the Asian film markets. Despite the American cast, the Pacific Rim franchise is built upon the giant monster (Kaiju) sub-genre that was first popularized in Japan.

While there is a distinct shortage of Asian actors in leading roles, Pacific Rim Uprising does make a conscious effort towards diversity in the casting. John Boyega stars as Jake Pentecost, the son of a hero Jaegar pilot from the first film. Jaegars are giant robots created to combat the arrival of the Kaiju monsters from portals in the sea. Although Jake initially followed in his father’s footsteps, the lack of monsters to fight led him to pursue of life of cheap pleasures instead. Having closed the portals at the end of the last film, the biggest task of the Jaegar pilots is hunting down humans who have patched together their own illegal robots.

15-year-old Amara (Cailee Spaeny) is one of these amateur Jaegar pilots, until she is caught alongside Jake when they attempt to steal the same robot parts. Threatened with jail time, Jake is convinced by his former co-pilot, Lambert (Scott Eastwood), to train the hacker teenager how to become a real pilot. And when breaches begin to occur, with Kaiju slipping through to attack major cities, Amara’s skills and the bond between her and Jake may be the only thing protecting humanity.

The storyline is all fairly predictable, aside from a minor mystery about the reason for the portal breaches, leaving a majority of the film’s enjoyment to come from pure spectacle. Although not as mindless as the Transformers franchise, there is a similar shift towards visual effects and flashy action over narrative substance. If this occasionally makes the movie appear as though it came from the mind of a child with action figures, I suppose that is just part of the charm of watching a film about giant robots. It may not be as well made as the original, but it does seem to have more fun with the premise.

This special effects bonanza is one of the benefits of a 4K Ultra HD presentation. It doesn’t make the movie any better, but the watching of it is certainly closer to the enjoyment of a theater experience. The colors are incredibly rich and deep, which especially seems to help in the darker sequences, along with the enhanced clarity. The immersive audio is also an improvement on the 4K disc, as opposed to Blu-ray, which is also included along with a digital copy.

Not only are there three ways to watch the film, but Pacific Rim Uprising also comes with a decent collection of special features on both of the discs. There are a handful of deleted scenes, which all have an optional commentary track by director Steven DeKnight, explaining why they were cut. There are also more than a few featurettes, most of which are promotional in nature. They cover everything from the new cast of characters/actors to the design of the new robots/monsters, as well as discussion of the original that inspired this new installment.