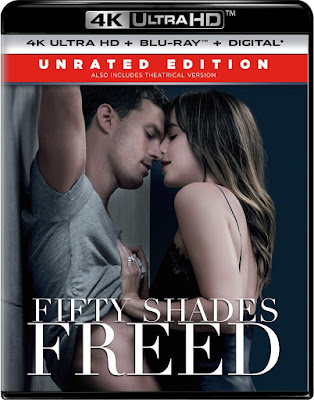 The biggest problem begins with the basic structure of the film. In fact, the plot has been a problem since the first film. In Fifty Shades of Grey, the entire film was about Anastasia Steele (Dakota Johnson) meeting and dating the damaged playboy Christian Grey (Jamie Dornan), and deciding to leave him after some light spanking. Fifty Shades Darker did not deliver on its title, bringing more tame sex scenes to their revived love story. This time Anastasia made the rules, feeding into the fantasy of fixing a damaged bad boy. The final installment begins with Anastasia and Christian getting married, and throws a series of inconsequential storylines at the couple now that their relationship offers less drama in marriage.

As simplistic as the first two films were, at least they focused on a single storyline. Fifty Shades Freed feels like a collection of deleted scenes, none of which connect to a larger theme, basically just dragging out the story to bleed brainless fans of another ticket price. There are a lot of subplots that just never take off, including several involving supporting characters that are introduced to never return to the narrative again. Christian is still a controlling asshole, punishing Anastasia by withholding orgasm when she stays out late with a girlfriend at a bar, but the true ugliness of his damaged childhood comes out with the news that his new wife is pregnant.

The main conflict in the last chapter is the return of Jack Hyde (Eric Johnson), Anastasia’s former boss who inexplicably threw his life away for the chance to harass her, despite knowing the company was owned by her boyfriend. Not only does he return without an intelligent plan for revenge, Jack shouldn’t be much of a threat considering how much security Christian’s wealth can buy. But they manage to drag this conflict out over several unbelievable sequences (although not enough to make this film feel like it has a complete plot), even making a last-ditch effort to connect Jack to Christian’s troubled childhood.

But maybe I am focusing too much on the story. After all, I imagine many people only see these films because they are curious about the sex scenes. However, whether it is because they are married and expecting a child, or merely because E.L. James ran out of ideas, Fifty Shades Freed is easily the most vanilla in a series of fairly bland movies. Even the unrated edition included along with the theatrical version offers little to no enhancements, at least as far as the sex scenes are concerned.

Along with two version of the film, the 4K Ultra HD package also comes with two additional ways to watch the film, in the form of Blu-ray disc and Digital copy. The special features on the disc include a handful of deleted scenes, even though the film is somehow already too long at 110-minutes (105 if you are smart enough to just watch the theatrical version). There is also a 30-minute behind-the-scenes featurette and several interviews with key cast/crew members about the film. The last extra is a collection of music videos tied to the film’s soundtrack.