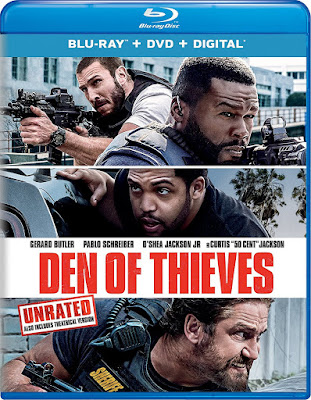 Although the movie begins with an armored truck robbery that ends in a firefight, the main heist of the film takes place with careful planning and finesse rather than brute force or firepower. While this elevates the film above the typical armed robbery narrative, it is also the reason for the limited amount of action. Instead the film focuses on the parallels between a top bank-robbing crew in the LA area and an elite unit of cops working in the LA County Sheriff’s Department, and the cat-and-mouse games played between them.

The bank-robbing thieves are made up of a group of veteran soldiers and football teammates, creating a seemingly unbreakable bond between them. They are led by Ray Merrimen (Pablo Schreiber) and Enson Levoux (Curtis “50 Cent” Jackson), but their team is being investigated after their robbery of an armored truck. ‘Big Nick’ O’Brien (Gerard Butler) is a cop that doesn’t follow many rules and his wild lifestyle is ruining his marriage, but he does have a reputation for getting his man. When Big Nick corners one of the crew’s men (O’Shea Jackson), he thinks that he has an inside man to help take them down in the middle of their planned heist.

Although Butler’s natural persona brings more to the role of Big Nick than all the remaining cast of characters, the more interesting storyline is given to the criminals planning the heist. In fact, the plans behind the impossible robbery of the Federal Reserve Bank and the climactic execution of the heist are the highlight of the film. Unfortunately, there is 140-minutes of film (149 in the unrated cut, also included on the Blu-ray), and a majority of this time is spent on bravado and machismo. As clever as the actual heists in the film are, the behavior of the men when interacting with each other is rarely as smart. At the top of this list of questionable behavior is Big Nick’s odd decision to let Ray know that his crew is being investigated long before the final heist. There is also an excessive amount of time dedicated to the personal failings of Nick, including his shortcomings as a husband and father, and the contrasting consideration the criminals give the same personal situations.

Along with an extended cut that adds 9-minutes to the theatrical cut of the film, the Blu-ray release comes with an alternate ending and over 20-minutes of deleted/extended/alternate scenes. There are also a few promotional featurettes that are only a couple minutes long and mostly feel like filler, but the highlight of the extras is a commentary track with director Christian Gudeast and producer Tucker Tooley. The Blu-ray package also comes with a DVD and Digital HD copy.