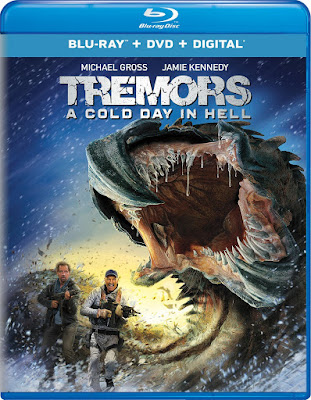 Continuing to be the only remaining original cast member in the franchise, Michael Gross returns as Burt Gummer, a man now known for being an expert Graboid killer, joined once again by his son and partner, Travis Welker (Jamie Kennedy). This proves to be a necessary addition when Burt discovers that one of this past encounters left him infected with an alien disease from the worm monsters. Slowly debilitated by the disease, the only solution is to capture a live Graboid in order to create an antidote from their venom.

Just in case Burt’s infection and the implications that Graboids can exist in the cold aren’t enough for the latest installment, A Cold Day in Hell also adds the idea that the government is trying to weaponize the creatures for military use. In the end, however, the film is mostly just filled with the same sequences of characters running from object to object as the monster worms hunt by the vibrations in the ground. There are also a few appearances by the flying creatures known as Ass-Blasters, introduced in one of the first straight-to-video installments.

Plot aside, the movie is mostly just an excuse for bad jokes and elaborate CGI battles against the underground monsters. If you have enjoyed the past few entries into the franchise, this will likely satisfy the same base level of entertainment. The effects could be worse, but it is hard to imagine the script could take itself less seriously by contrast. I don’t see an endgame for the Tremors films, but I also can’t imagine that they will ever come close to the charms of the original.

The Blu-ray release comes with a six-part making-of featurette that is just under 15-minutes long. There is also a scene breakdown for a water-attack sequence, and a brief featurette about Easter eggs in the film’s new setting. The Blu-ray package also comes with a DVD and Digital HD copy.