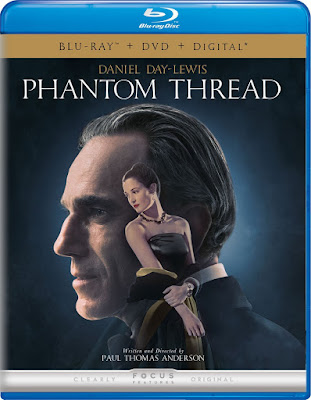 Set in the high fashion world of 1950’s post-war London, Phantom Thread starts as a character study of renowned dressmaker Reynolds Woodcock (Daniel Day Lewis). Although he is romantically paired when the film begins, it is clear that his focus remains on his career. With a routine set in stone, Reynolds relies most on his sister, Cyril (Lesley Manville), who is so involved in his life that she even ends his relationships for him. This pattern and the direction of the film changes with the arrival of a new hired hand in the household, Alma (Vicky Krieps).

Alma is far more strong-willed than the women that Reynolds is accustomed to, and he finds his life and work disrupted by her presence. At the same time, there is something about Alma that Reynolds cannot dismiss. They develop a relationship that is unconventional to say the least, and Alma proves she may be the only one able to handle Reynold’s. Unable to control Alma and incapable of letting her go, Reynolds must readjust his meticulously planned life, much to the irritation of his sister.

Although there is no way to prepare audiences for the unpredictable tone of the film’s narrative, it only takes a few moments of the film to appreciate the visual style of the filmmaking. The cinematography is lush and mesmerizing, only outdone by the production design. The costumes are fittingly immaculate, convincing the audience of Reynold’s success as a dressmaker. There is actually a sense of contrast between the perfection in the outward visuals of the world and the internal turmoil of the characters, leading to an unexpected resolution.

It is also impossible to talk about Phantom Thread without mentioning the acting. While it is one of his more subdued performances in recent years, Daniel Day Lewis is fantastic in his final film role before retiring from acting. But just as impressive are his female co-stars, each holding their own alongside the multiple Oscar winner. With minimal dialogue and a nuanced narrative, the performances are often the film’s greatest asset in conveying the film’s narrative.

The Blu-ray release of Phantom Thread feels like the necessary way to view the film, because of the rich visuals brought by the film, but there is a DVD and a Digital copy included as well. The special features include a series of camera tests with commentary by Anderson, deleted scenes with music by the film’s composer, Johnny Greenwood, and a two-minute fashion show with the costumes of the film. The longest of the extras is a behind-the-scenes featurette with production photography and demo versions of Greenwood’s score.