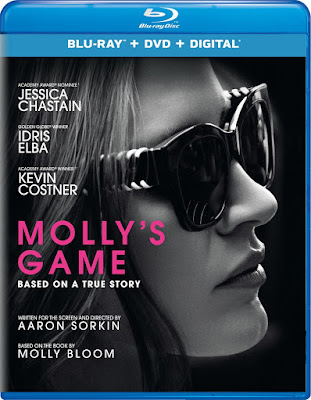 Despite an Ivy League education and an upper class upbringing, Molly makes the decision to direct her ambition towards the world of high stakes poker. It starts with a low level assistant job, but as Molly helps her boss run a poker game with celebrities and LA elites, she takes the initiative to learn how to run it on her own. Backstabbing her boss, Molly takes the participants of the game and starts her own, creating a reputation for herself. This leads to practices in her games that are illegal, though there proves to be much more behind her arrest.

With her assets seized and criminal charges brought against her, Molly’s only hope is Jaffey’s strength as a defense lawyer. But Molly’s pride also prevents her from getting out of the charges the simplest way, by giving information to the FBI about the clients she had in her poker games. Although the LA games were mostly filled with celebrities, she finds that organized criminals in her New York games, bringing unnecessary attention on herself. Rather than provide the FBI with the list of her clients, Molly risks criminal prosecution.

As expected, Sorkin’s script is full of great dialogue, but he has also chosen to focus on yet another unsympathetic protagonist. While Molly is certainly intelligent, her hypocrisy and pride often makes it difficult to root for her. Even given context through flashbacks of a rough childhood thanks to her demanding father (Kevin Costner), Molly often seems like little more than a spoiled and petulant child grown up. This doesn’t make the film any less engaging, but it is difficult to care too deeply about what happens to the characters.

The Blu-ray release of Molly’s Game comes with DVD and digital copies of the film, though there is not much in terms of special features on the actual discs. There is a brief featurette, “Building an Empire,” which is only about three minutes dedicated to discussing the real person and adaptation process for the film.