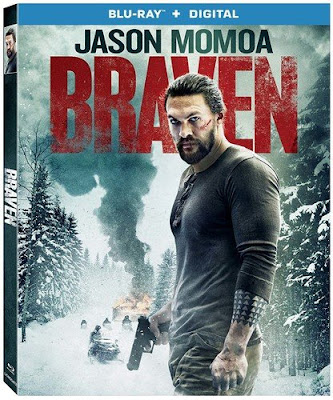 In a role that feels a bit like type casting, Momoa stars as Joe Braven, a logger living with his family in a small Canadian town. After struggling to keep control of his father (Stephen Lang), who is suffering from the early stages of dementia, Joe takes him for a weekend away in their remote family cabin. Unbeknownst to Joe, one of his employees is helping traffic drugs with shipments of lumber, and stashes it away in the cabin. When Joe arrives with his father, he is quickly joined by a ruthless group of criminals (led by Garret Dillahunt).

Going against the instructions of her father, Joe’s daughter hides in the back of their car on the trip to the cabin, putting her in danger when the drug traffickers arrive heavily armed. This is about as simple as the story gets. A group of criminals are trying to get their drugs and Joe is trying to protect his family. The rest of the film is just a series of action sequences, most of which are fairly repetitive.

With the simplicity of the plot, there is a lot of room for creativity in the action, but this ends up being the film’s largest shortcoming. As promising as Momoa with a hatchet sounds, the choreography of the fights is rather bland. Most of the action sequences are simply one-on-one hand-to-hand combat sequences as Joe takes down each individual invader. What the film is lacking are larger set pieces, or impressive stunts. While the plot resembles a classic 80s action film, the execution is much more fitting a straight-to-video sequel to one of these franchises.

The Blu-ray release of Braven comes with a digital copy, as well as a single extra on the disc itself. The special feature “The Braven’s View” is a basic featurette, promotional more than it is informative.