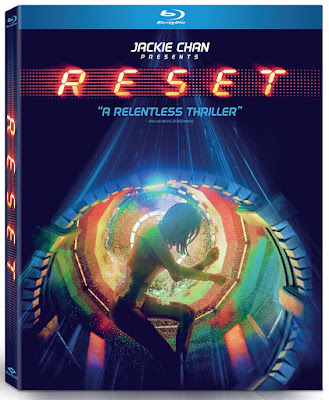 Set in the near future, Reset follows the scientific experimentations leading to the invention of a device that is meant to bridge the world between alternate timelines. This is somehow used interchangeably with the idea of time travel, which is something of a plot hole, but matters little when the chase sequences begin. Knowing that scientist Xia Tian (Yang Mi) has access to the groundbreaking technology, a villain named Cui Hu (Wallace Huo) kidnaps her son as a bargaining chip. She complies and steals the technology needed to replicate time travel/alternate timeline travel, but it isn’t enough to save her son. Desperate to right this wrong, Xia Tian travels back in time to try again.

Predictably, it takes more than one time to get things right, and before long there are multiple versions of Xia Tian existing in the same timeline. While the decision to have multiple dead children as the catalyst for the repeat time travel is somewhat bold, the remainder of Reset is unfortunately bland and predictable. Rather than dealing with the logic of having multiple versions of the same character in the same timeline with even the same depth of the Back to the Future franchise, Reset simply makes up its own rules as it goes along. There is a loophole allowing for the extraneous duplicates to be removed, and the film can instead spend all of its time dedicated to mindless action sequences.

Fans of action movies may appreciate the Taken premise with a time travel twist, but there isn’t much to offer true science fiction fans. It is a film full of car chases and mindless spectacle, but little beneath the surface thrills. While most time travel movies are enjoyable because of the mind-bending twists, Reset is all about exciting surface thrills without any depth. There is also a lack of comedic relief, which makes sense considering the number of timelines that feature dead children.

The Blu-ray release of Reset is a logical choice considering the heavy reliance on special effects, but the high definition is the only reason for the upgrade. There are no special features on the disc.