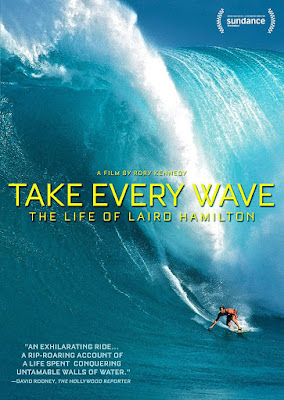 The film gives us the entire journey of Laird Hamilton, from his young days as a rambunctious brat of a kid living on the beach in Hawaii, to a high school dropout who only wanted to surf and stubbornly refused to compromise in order to compete. After a period modeling and acting (but never reaching success due to his poor work ethic), he became interested in big-wave surfing, and developed a way to surf them with a group of close friends. Then he abandoned and betrayed those friends when he was the only one to become famous for what they had all perfected together. So, now he is the one rich and famous with a documentary that is far too long just so that his name can me included in it.

When responding to whether he regrets the way he stepped on his closest friends to get where he is, he admits that it was bad, but also says that he would do it all the same to get where he is now. That’s the kind of moral Hamilton’s story has, and this selfishness is also central to the story of his current marriage, which was started during his last marriage. It is unfortunate that the documentary chooses to quickly pass by these character flaws, instead choosing endless praise for a majority of the lengthy two-hour run-time.

Much of the film highlights the ego and arrogance of Hamilton, which Hamilton himself carefully justifies as assets rather than flaws within his interviews. Both the constant presence of modern-day Hamilton in the documentary and a lack of counter-arguments to some of the more controversial aspects of the man seem to drown the movie in bias that is difficult to ignore. He may be a great surfer, but Take Every Wave did little to convince me that he is a good (or even decent) man.

Even if this entire film is a bit like the visual equivalent of reading a fan letter (or worse yet, a love letter Hamilton has written to himself), at least there are numerous scenes of awesome waves and daredevils that ride them. Most of the modern footage is kind of weak, because Hamilton is getting pretty old and can’t even walk without arthritic issues in his hip, instead choosing to focus on the tinkering he does with the surfboard design. The narrative about the past also has a lot of the same tinkering, with Hamilton taking credit for nearly every innovation since the invention of the board, but the film is far more entertaining when he just gets in the water to ride the waves.

A lot of the film’s best footage is archival, meaning that there is little cutting edge surfing photography. Much of what is captured is from a distance, which makes sense considering the waves he is best known for riding. More often than not, the excitement of the footage only comes from the stories that the images are paired with. The main message of nearly all of these stories is that surfing can be extremely dangerous. But the photography of waves without surfers show a beauty in the movement of the water as well, providing the film with a nice visual dichotomy.