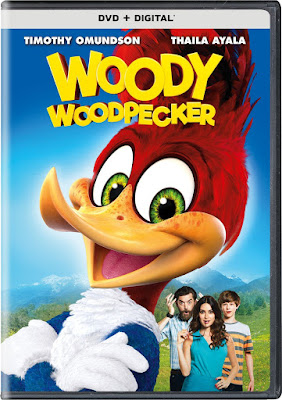 Knowing how popular Woody Woodpecker is in Brazil, this American production opportunistically took advantage of a cheap production in Canada. Even though the film is being dumped onto home video this week, it has already served its purpose as a foreign export. It really doesn’t matter if anyone in the country of its production actually sees the film, and the reaction from critics and audiences alike seem to reflect that reality.

Given a predictably simplistic plot with a slight conservationist slant, Woody Woodpecker allows the energetic bird to wreak havoc as a troublemaker for much of the film. After losing his job in the city, Lance Walters (Timothy Omundson) plans to sell his family’s property in the forest after building a luxury mansion designed by his high maintenance fiancé (Thaila Ayala). There are two things standing in the way of Lance’s plan: his neglected son moving in with him and having Woody Woodpecker as a neighbor.

With the help of Woody the Woodpecker, Lance inevitably rebuilds the relationship with his son, Tommy (Graham Verchere). But before this is possible, Lance must find a way to get along with the endangered cartoon woodpecker. Despite his issues with the destruction of the woodland area that is his home, Woody is easily bought off with some peanut butter cookies. This easily removes any conservationist slant from the film, as well as the film’s conflict until a pair of redneck poachers set their sights on the bird.

About as annoying as the Alvin and the Chipmunk movies without the inclusion of popular pop songs, Woody Woodpecker may not be as bad as expected, but it offers little to anyone over the age of 10. The animation has been updated, leaving little beyond Woody’s laugh to remind audiences of the original cartoon. This is a quick cash grab, through and through, though the youngest audience demographic won’t care, apparently along with much of Brazil.

The DVD release comes with three featurettes. The first is “Guess Who? The Evolution of Woody,” which is the longest and most interesting, if only because it is about the character as a whole rather than just this particular entry into the franchise. At 3 minutes each, the remaining featurettes are half as long as the first, and are only concerned with the production of this film. “The Making of Woody Woodpecker” is a EPK featurette promoting the film with basic interviews and behind-the-scenes footage, while “Working with Woody” is about the changes made to adapt Woody to a live action setting.