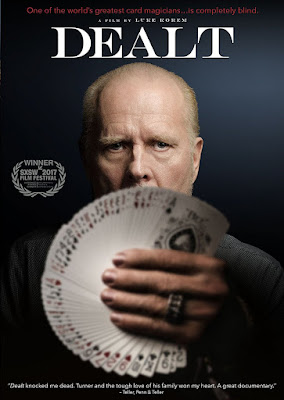 This makes Dealt more of a character study of a blind man than it is a film about magicians or card mechanics (as Turner prefers to refer to himself). There is some footage of card tricks being performed, but a majority of the film’s length is spent discussing the childhood disease which left him and his sister legally blind, and their different approaches to life after being diagnosed. And in much of the modern footage, Turner is forced to come to terms with his limitations after his son leaves for college, leaving the magician without his live-in personal assistant and forced to figure out how to do things for himself.

As interesting as Turner’s journey and his stubborn refusal to admit his own shortcoming may be, especially when contrasted by his sister’s self-sufficiency, there is some redundancy in this material. We seem to go in circles as the documentary bounces back and forth between Turner and his sister, leaving discussion of cards and magic aside for a portion in the middle of an already short documentary. On the other hand, there feels like a shortage of material about Turner’s actual abilities. While we do see some of his tricks and are given a rundown of his career, there is no insight into the tricks that allow Turner to keep track of the cards without ever seeing them. We may understand the man better by the end of Dealt, but his abilities remain a mystery.

While many biographical documentaries choose to blindly praise their subject matter, no doubt affected by the time spent in proximity during filming, Dealt offers a welcome change in examining the subject’s shortcomings as much as his gift. At times this can become repetitive to the point of bogging down the film’s momentum, leaving audiences longing for more footage of his abilities, but it also provides the film with a revelation in its resolution that is far more satisfying than endless footage of card tricks.

The DVD includes a promotional making-of featurette, along with a handful of deleted scenes and a trailer. There is also an optional audio description for visually impaired viewers.