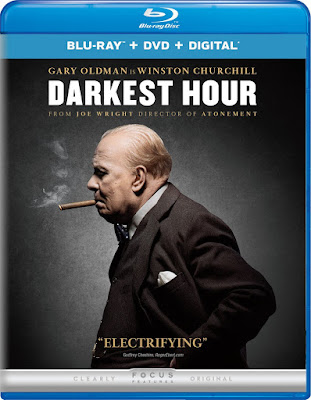 As well as making a great companion piece to Dunkirk, Darkest Hour would also benefit from a double feature with Churchill, another biopic of the former Prime Minister which takes place during the end of the war. Rather than depicting the end of his time as Prime Minister, Darkest Hour begins with his appointment. Winston Churchill (Gary Oldman) is still recovering politically for his mistakes in the Gallipoli Campaign, and this weighs heavily on his decisions in a failing war against Adolf Hitler.

The film begins with the members of Parliament deciding to remove Neville Chamberlain (Ronald Pickup) as British Prime Minister, with Churchill as the only decent replacement available, despite his unpopularity. Once appointed, Churchill faces continued skepticism, even from members of his own party and King George VI (Ben Mendelsohn). Even though it is clear that Churchill cares a great deal about his country, many see his refusal to come to peace terms with Hitler as nothing more than hubris to make up for the failings at Gallipoli. While Churchill believes that victory against the Germans is the only option, many are convinced that this will lead to England’s complete destruction.

With his stubborn and often cantankerous attitude, it is easy to see why Churchill rubs many people the wrong way, and the film would have difficulty making him appear sympathetic if it weren’t for the personal interactions we are privy to. This obviously includes his wife, Clementine (Kristin Scott Thomas), who is a sounding board for his doubts and concerns, but the film primarily introduces us to his ways through the eyes of his new secretary, Elizabeth Layton (Lily James). While her first interaction with Churchill ends in shouting and tears, the Prime Minister eventually shows his softer side to Elizabeth, who clearly represents the average British citizen.

While Dunkirk is a film without much dialogue, Darkest Hour contains little else, so it is something of a miracle that Joe Wright has made the film so visually engaging. As he has previously proved capable of doing, Wright uses constant camera movement and precise editing to keep the film exciting, even during scenes of nothing but dialogue. This added with flawless production design and some spectacular lighting makes Darkest Hour one of the best directed films of the year, even if it is far from the flashiest.

The Blu-ray release of Darkest Hour comes with DVD and digital copies of the film, along with a few special features on the discs. There are two featurettes, one of which is a general making-of featurette, while the other predictably discusses Oldman’s transformation into the role. While some of the endless praise over Oldman’s performance is no doubt due to the make-up prosthetics which transform him physically, it is also his ability to capture the smaller nuances of Churchill’s demeanor along with the raw passion which will likely lead to Oldman winning an Academy Award this year. The last special feature is a feature commentary track with Wright.