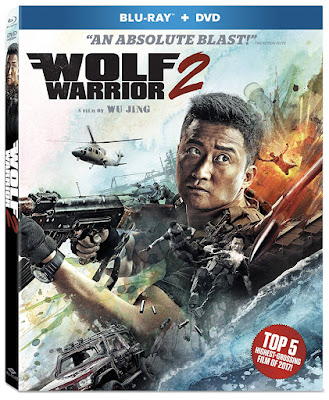 Wolf Warrior 2 brings back more of the same elements that made up the original film, for better or for worse. Our protagonist returns to fight a new battle, one which calls for a number of explosive action sequences a message so patriotic that it often borders on being propaganda. All of the thrills from the first film are recreated with somewhat diminishing returns, but action fans are likely to be satisfied with an increased emphasis on spectacle.

Despite continuing the title referring to an elite group of Chinese Special Forces operatives, Leng Feng (Jing Wu) is discharged after the events of the first film. He takes to a peaceful life at sea until coincidentally crossing paths with a group of mercenaries terrorizing innocent civilians in Africa. In an effort to save a doctor (Celina Jade) and several Chinese citizens volunteering in the region, Feng takes up arms against the invaders. If the plot feels overly simplistic, this is merely to allow for an emphasis on set pieces instead.

The film at first seems to be advocating for universal kindness and the fight against tyranny, though there is a clear theme at the center of the movie which serves as a reminder that China does not abandon its citizens even when they are out of the country. This may help tack on a patriotic message to the film, but the strength in the narrative comes from the more intimate relationships between the characters in peril. Countless scenes of cutaways to officials making decisions for the Chinese citizens feels forced and impersonal compared to Feng’s relationship with the men and women who choose to fight alongside him.

The story may work hard to balance between the bonds of brotherhood in battle and the patriotism of the Chinese people, but most fans will be more concerned about the continuation of the impressive action that made up the first film. While the sub-par CGI used for explosions and blood splatter continues to be a problem (even more than I remember being the case in the original), the gunplay and hand-to-handy fight choreography simultaneously continue to impress. While Wu may not be the most charismatic of actors, he has a physicality that makes even the over-the-top action feel somewhat believable. It doesn’t hurt that he has a worthy adversary in the form of head mercenary, Big Daddy (Frank Grillo).

Returning as both the lead protagonist from the first film and as the director and co-writer, it is clear that Wu has a lot to do with the formation of this franchise. And considering this film was briefly the most successful film in Chinese box office history, I would not be surprised to see him return for a third outing. If Sylvester Stallone can continue to make Rambo movies well into his 60s, there is plenty of time for Wu to continue.

The Blu-ray release of Wolf Warrior 2 comes with a DVD copy of the film as well. Even though it doesn’t do anything to help the film’s technical shortcomings, high definition is still the best way to experiences this high-octane action spectacle. The special features include a couple of behind-the-scenes featurettes and the trailer.