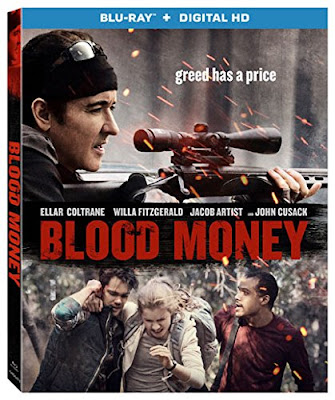 Despite some critics’ complaints, I did not have a problem with the casting of John Cusack as Miller, the criminal who sets off a deadly chain of events when he parachutes out of plane with a fortune of stolen money. The criticism of this casting decision had to do with Cusack’s lack of intensity, but this choice makes more sense when you realize that he is less of a villain than the greedy college student that stumbles on the stolen money and claims it as her own.

Lynn (Willa Fitzgerald) is in the wilderness on a whitewater rapids trip with her two male friends, both of which are clearly in love with her. Victor (Ellar Coltrane) had a brief fling with Lynn and he is still secretly harboring feelings, even though she has moved on to sleeping with Jeff (Jacob Artist), who looks ten years older than his childhood friends. This love triangle is obnoxious from the moment these three characters are together, especially since Lynn treats them both horribly and they repeatedly follow her around like pathetic whining pets. Even when she makes it clear numerous times that the money means more to her than the lives of either of them, both guys continue to sacrifice themselves for Lynn. This is enough to make you root for Miller to shoot any of these characters.

When the material is as obvious as this is, a lot comes down to casting choices and the performances to bring life to a stale formula. Cusack is low key, but his involvement was the only compelling aspect of the film. Coltrane has still yet to convince me that he is an actor and not just the central figure in a gimmicky filmmaking idea, and this film doesn’t provide many opportunities once the characters begin making stupid decisions. And Artist simply looks too old to be playing characters in their early 20s any more. It may have worked to have him play a younger age on “Glee” but he has aged considerably since the show aired, and now he doesn’t look like he fits in the role at all.

There are plenty of options in the category of low budget action/thrillers that take place in the wilderness with a bad guy hunting innocent people. Blood Money offers a slight twist on the sub-genre/trend, but that originality comes at the cost of obnoxious characters. The action is minimal, but the suspense is effective. If I weren’t so annoyed with the ending, I might have even given Blood Money an unenthusiastic recommendation.

The Blu-ray release for Blood Money comes with a Digital HD copy of the film. There is only one special feature on the disc itself, which is a brief promotional featurette.