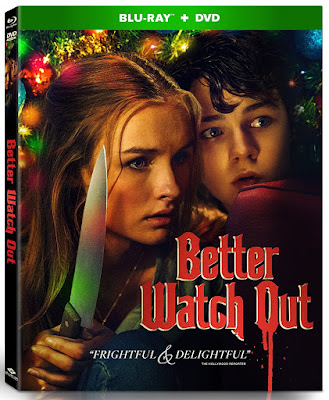 Better Watch Out is a near impossible film to write about without ruining at least some of the effect. Even by merely describing it as a cross between Home Alone and The Strangers doesn’t quite convey the tone of this wholly unique home invasion thriller. At times the film’s twists and turns can play against the expectations audiences may have for a typical home invasion film, but the revision to the recently popularized sub-genre is a welcome adjustment. With the added ironic contrast of setting the film amidst the joyful holiday season, Better Watch Out is a brutal little treat for horror fans this Christmas.

The film starts out innocently enough, with twelve-year-old Luke (Levi Miller) making plans to confess his love to his seventeen-year-old babysitter, Ashley (Olivia DeJonge) before she moves out of the neighborhood. Luke has the opportunity to make his move when his parents (Patrick Warburton and Virginia Madsen) go out for an annual Christmas party and hire Ashley to watch him for the evening. After someone begins to terrorize them and finds a way into the house, Ashley finds herself in danger of more than just a pre-teen’s sexual advances.

Even with unexpected turns here and there, I was worried that the film may run out of steam before the end, if only because of the limited number of characters in the narrative. This is solved by adding more people to the mix in the form of unexpected guests, from Luke’s best friend, Garett (Ed Oxenbould) to the two guys competing for Ashley’s affection (Aleks Mikic and Dacre Montgomery). Things escalate to the point of violence, so that added characters are helpful to keep the action going. Horror fans will be pleased by these sacrifices, which are vicious despite the lack of excessive gore.

There is a double-edged sword in the plot twists of Better Watch Out. I am purposefully refraining from spoiling any of the twists, because the unexpectedness is half of the fun. On the other hand, part of me felt disappointed by the loss of the film that I thought I was watching, rather than excited by the sudden change in direction once the twist arrived. Some viewers may feel duped rather than surprised by the secrets that the film contains. My only suggestion is to view Better Watch Out with as few expectations as possible.

The Blu-ray combo pack also comes with a DVD copy of the film, as well as a cheap and tiny collectible holiday “card” included inside. It is basically just a flimsy cardboard insert. There are no special features on the actual discs.