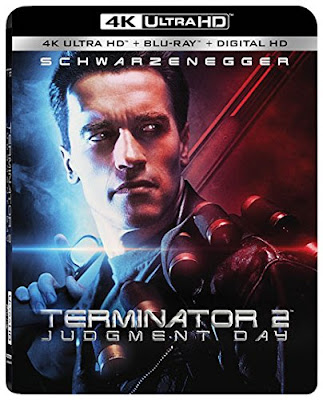 But as amazing as I remember the film being as a child, it is not nearly the same as the latest 4k Ultra HD release of Terminator 2. For one, only the theatrical version was available, while the 4K release comes with three different cuts of the film. And we watched the special effects-driven film on VHS, which is a far cry from the Ultra HD presentation of the latest technology. Even though this seems to be one of the most frequently re-released films and only the theatrical release has been given the full treatment, the 4K disc is currently the one to own. Terminator 2 was groundbreaking for its special effects at the time, the back of this disc calling it the “greatest action blockbuster of all time,” but this pales in comparison to how it changed my perception of film. My entire life since then has been a series of pursuits, always hoping that a film will bring the same awe and excitement I found watching this forbidden action movie as a kid.

At this point you are probably wondering how a film with such significant first-viewing holds up as I have returned to it as an adult. Maybe you aren’t wondering, but I was as I put the 4K disc into my player, and though I found the extended cut of the film to drag a lot more than I remembered from my first experience and the special effects are slightly rustic at points, I still turn into a bit of a child watching this violent sci-fi film. The plot is actually quite simple if you are already acquainted with the original robot/time-travel action film. This time around Arnold Schwarzenegger is back as a good robot, sent back to protect John Connor (Edward Furlong, who seemed much cooler when I was younger than he was). John is the son of Sarah Conner (Linda Hamilton), and his father was a time-traveling soldier who protected Sarah from a terminator in the original. You have to wonder why he sent back a robot that looks exactly the same as the one attacking them previously (as well as wondering why a robot would have an accent), but this was Schwarzenegger at his best, so don’t question it too much.

At the time Terminator 2 was renowned for the groundbreaking use of CGI, and it makes perfect sense for this film to be given the full treatment in 4K. The presentation is flawless, and with each menus and logo page the enhanced high definition becomes more apparent.
There is only the film on the 4K disc, but a Blu-ray copy is also included and it is jam packed with content, most of which was made available in previous releases. As previously mentioned, there are three versions of the film: the director’s cut, extended director’s cut, and the theatrical. The special features include a 55-minute making-of documentary and a 30-minute making-of featurette, along with a couple deleted scenes. Also available is the commentary with James Cameron and co-writer William Wisher, and a second commentary track with 26 cast and crew members. There are a few additional extras, but the real reason for this package is the pristine presentation of a groundbreaking film that is as entertaining as it ever was. The package also comes with a Digital HD copy of the film.