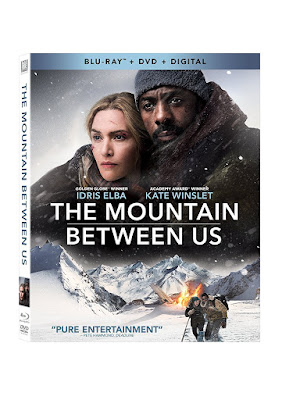 The plot of the film is extremely simple, and as an avid and long-time fan of romance films, I couldn’t help but notice that it simply takes the story from Sandra Bullock/ Ben Affleck romantic comedy, Forces of Nature, and gives it a more dramatic and secluded retelling. When two strangers are stranded in an airport due to weather, they become impromptu travel partners and end up falling in love with each other during the perilous journey home. Ben (Elba) is a surgeon in a hurry to help a patient, while Alex (Winslet) is a photographer trying to get home for her wedding to Mark (Dermot Mulroney). The pair decides to charter a small plane together, hiring Walter (Beau Bridges) and his dog to take them to their destination.

The plane inevitably crashes on a remote mountain, leaving Ben and Alex with minor injuries, a dog to care for (but never to consider eating, despite starvation constantly threatening their survival), and a long trek to civilization. After wasting several weeks waiting for help to arrive, Ben and Alex begin to make the journey down the mountain on their own. Forced to rely on each other through several predictable and contrived scenarios of danger, Ben and Alex also inevitably fall in love with each other. In-between scenes of peril (which are too far apart for this film to ever build up much suspense) are moments that allow these characters to get to know each other. And by keeping them secluded from other for a majority of the film, we are meant to justify the romanticized adultery at the center of the narrative.

The Blu-ray release does nothing to help the unlikable actions of these cheating survivors, the beautiful location choices in high definition do help distract from the film’s shortcomings. The film looks beautiful, but it is just a shame that the screenplay is as shallow as it is. Those who don’t mind turning their brain off while they watch movies may be adequately distracted by The Mountain Between Us, though the more thoughtful viewer will likely feel manipulated by the likeable cast and the attractive photography.

Along with the high definition disc, the Blu-ray package comes with a DVD and a Digital HD copy of the film. The special features on the disc itself include a director’s commentary, deleted scenes, and three featurettes. These features cover the difficulty of the location shooting, the chemistry between the stars, and the stunts done in the film.