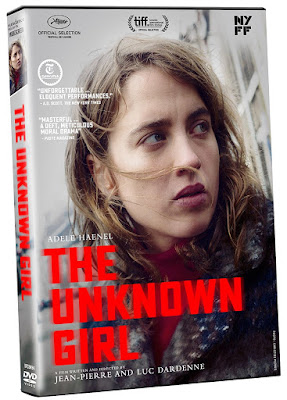 After testing the waters of the mainstream by casting movie star Marion Cotillard in their last film, Two Days, One Night, Jean-Pierre and Luc Dardenne have returned to their roots with The Unknown Girl. But even with a movie star, the brother filmmaking team has never abandoned their social realism, both in style and the content of their narratives. This is true of The Unknown Girl, which never feels generic despite existing within the narrative structure of the mystery genre.


The mystery at the center of the story involves the death of a young woman, and a local doctor named Jenny (Adéle Haenel) becomes obsessed with finding the cause when she discovers that she might have prevented it. After ignoring the door buzzer late one night, Jenny is informed by the police that this was the victim looking for help shortly before her untimely demise. Out of guilt for her shirked responsibilities, Jenny starts her own informal investigation of the events that led to the death of the unfortunate young woman.

Despite the added structure of a mystery that must be solved, The Unknown Girl loses some of its power in the repetitious constraints of this story direction. By the time we receive answers about the mystery, the question itself has worn somewhat thin, but it is a mistake to think that this is the only point to the Dardenne’s film. While there is some enjoyment in the solving of a crime, the true beauty of the film comes in the character study of Jenny. The manner of professionalism with which she carries out her practice has resulted in a job opportunity with a larger doctor’s office, but the events with the deceased girl awaken a forgotten compassion in the physician.

This is carried out with the Dardenne’s signature subtlety, expressing more through nuanced performances than obvious dialogue. Crucial to this process is Haenel, who must carry the film in nearly every scene of the film, despite rarely being given dialogue that accurately conveys her character’s struggle. Instead, the film relies on Jenny’s body mannerism and micro-expressions to convey her internal world the eventual character arc.

As with many of their films, the Dardenne’s provide us with a richly developed female protagonist, one as flawed as she is admirable. Although I was at first skeptical that the young actress could convincingly play a somewhat seasoned doctor, the instinctual way that Haenel carries out the tasks of a physician immediately comes off as someone very familiar with the daily routine of the practice. The role feels lived in and sincere, in the quiet and uneventful moments even more than the more dramatic ones. It is a simple film, but that is also where the power in the filmmaking comes from. What it lacks in grandiose dramatics, The Unknown Girl makes up for in the believability of its characters and situations.

The DVD has been released without special features of any kind, which is even more disappointing considering their last film received the Criterion Collection treatment. Even without the bells and whistles, however, this is a DVD worth owning for any film fan.