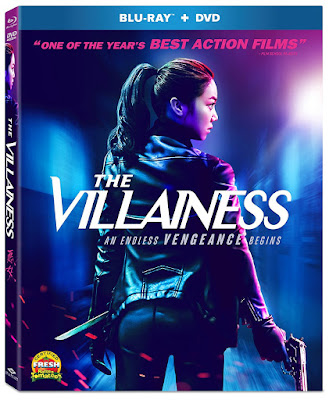 The Villainess is a South Korean film that takes place partially in China, with action scenes shot with the hyperkinetic movement of many modern cult Japanese films. Although these various elements often give the style of the film a bit of cultural ambiguity, the revenge-laden plot is distinctly South Korean. The story about a trained female assassin out for revenge against those who made her also often resembles the Kill Bill films, but the non-chronological storytelling in this film is often a chore and it lacks a crucial element that made Quentin Tarantino’s films fun. Even with an impressive number of action sequences, The Villainess is often more torturously bleak than feels necessary.

The Villainess opens with a rush of adrenaline through a first-person shot slaughter of dozens of men, even though this sequence lacks any context until the third act of the film. And this is how much of the film proceeds, providing the audiences with thrilling sequences that rarely make sense until long after they have concluded. In all reality, the narrative is simple despite its contrivances, and it is merely the way that the story is presented that is complicated. At the center of the story is Sook-hee (Ok-bin Kim), the assassin from the opening sequence. We soon discover that she was trained to be a killer from a young age, and puts these skills to use on the men she believes responsible for the death of her husband (Ha-kyun Shun).

In the biggest gap of believability, the story takes a turn when Sook-hee is not arrested for her act of revenge. Instead she is offered a deal; work as a sleeper agent for ten years for the chance to win back her freedom and a future with the unborn child of her deceased husband. Unbeknownst to her, Sook-hee is assigned a handler named Hyun-soo (Jun Sung) to watch over her. After a lengthy training process, Sook-hee is moved to an apartment with her daughter, conveniently next door to an amiably over-eager Hyun-soo. As they build a bond together, Sook-hee becomes one of the top assassins, until she is ordered to kill someone from her past.

I kept waiting for The Villainess to take off as a full-blown action-revenge film, but it doesn’t have the same dedication to the cool factor of exploitation. Even with impressive sequences throughout the film, such as a sword-fight motorcycle chase and an opening that resembles the hallway scene of Oldboy amplified by excessive violence and first-person camera work, the psychological weight of the narrative prevents the spectacle from truly shining. Despite the excessively violent revenge, it still feels off balance considering what the narrative puts Sook-hee through.

The Blu-ray release of The Villainess comes with both the high definition disc and a DVD copy. The special features include a making-of featurette and a trailer gallery.