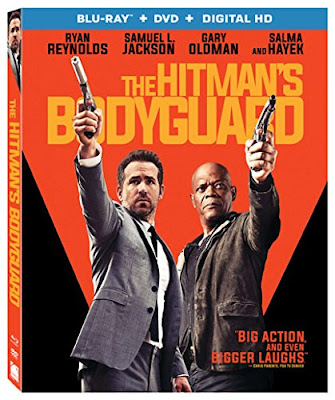 The Hitman’s Bodyguard is the McDonald’s of buddy action comedies. Nearly every entry into the genre is likely to be considered ‘junk food’ entertainment, but this is about as cheap as it gets while still remaining popular. It is lazy, lacks and substance, and feels derivative of something that was once innovative, but millions will continue to consume it without thought. And maybe that is the point, but I found myself craving for dialogue that wasn’t funny merely for the choice of expletives sprinkled around like a sophomoric game of ad libs. Not only a decent dose of action in the third act was enough to save this film from leaving me feeling unsatisfied.

With a rarely funny screenplay that offers few twists in a straightforward narrative, nearly all of the enjoyable elements of The Hitman’s Bodyguard are dependant upon casting. With the increased fame brought by fanboy praise of his depiction of Deadpool, Ryan Reynolds brings his signature sardonic sense of humor to the role of Michael Bryce, a successful bodyguard whose career is ruined by a failed job. When Bryce’s ex-girlfriend (Elodie Yung) is betrayed by a double agent working in Interpol, she calls him to help transport an important witness to testify at the International Criminal Court in order to take down an evil dictator (Gary Oldman). The only problem is that this witness is Darius Kincaid (Samuel L. Jackson), a hit-man who has had several run-ins with Bryce while on the job.

The humor from the film comes entirely from Jackson being given the freedom to say the F-word as often as he wants, while Reynolds sits beside him providing the sarcastic retorts. Unfortunately, the screenwriters seem to feel that this is enough, rarely giving the material any depth or nuance. The dialogue is occasionally funny, but it is never clever. The action fares slightly better, often lacing the violence with just enough slapstick to lighten it up. I would even go so far as to call the action almost clever, which makes the laziness of the plot and dialogue that much more disappointing.

Generic as it may be, there is one guarantee in watching this film; fans of the cast will get what they expect. Everyone is type cast to the point of complete predictability, with the possible exception of Salma Hayek, who competes for the foulest mouth in her role as Kincaid’s wife. Reynolds is sarcastic, Jackson is loud and profane, and Oldman gives another chameleonic performance as a Russian villain. It isn’t original or innovative in any way, but provides a mediocre duplicate of a better product.

The Blu-ray combo pack comes with a DVD and a Digital HD copy included, along with a ton of exclusive extras. There are a few special features included on both discs, including a making-of featurette and the director’s commentary, but a majority of the extras are only on the Blu-ray disc. There is plenty of extra footage, in the form of outtakes as well as deleted/extended/alternate scenes, which also show the level of contribution the cast made to the written script. There are also three additional promotional featurettes included.