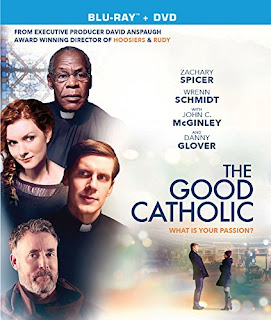 Straddling the line between a faith-based film and a romantic comedy, The Good Catholic sets up a conflict in its premise that is destined to disappoint one of the two target demographics. This is not to say that it isn’t done in a thoughtful way, but by forcing the main character into a situation where he must choose between love and faith inevitably creates a rivalry between spirituality and worldly pleasures. On the other hand, this is a film unafraid to integrate issues of religion into its storyline in a way that is refreshing, even if the more pious viewer may take issue with the casualness of the depiction.

The premise for the movie sounds like a typical rom-com, even sharing similarities with 2000’s Keeping the Faith, minus the love triangle. The conflict in The Good Catholic is not who will be paired up, but whether our protagonist will choose worldly love or a life of sacrifice for God. Daniel (Zachary Spicer) is a dedicated priest, faithful in his service even if he lacks the same spiritual connection that his fellow priests have. This becomes even clearer to Daniel when he takes the confession of a young woman named Jane (Wrenn Schmidt), who claims to be dying. As they grow closer during unconventional confessions, Daniel begins to see his life choices differently.

While Daniel wrestles with the conflicting feelings he has about Jane, and what that says about his commitment to the church, he looks for advice from his two extremely different fellow priests. Ollie (John C. McGinley) indulges in worldly pleasures every chance he gets, whereas Victor (Danny Glover) believes that restraint and sacrifice are much more important to faith. Each has different advice for Daniel, who must decide what he really wants out of life. Although this sounds predictable, and certainly does march down an inevitable path, the journey getting there is constantly surprising because of the thoughtful dialogue and a dedicated cast of talented actors.

The Good Catholic is a tiny film. There are only a few locations and basically just four actors in the cast. Even the premise for the film feels generically simple, and yet the film never feels small. There sincere human emotions captured accurately in each scene of The Good Catholic, so even when it isn’t a consistently great film, it feels honest and real in a way that is unexpected. The Blu-ray release comes with a DVD copy also, though neither disc has any special features.