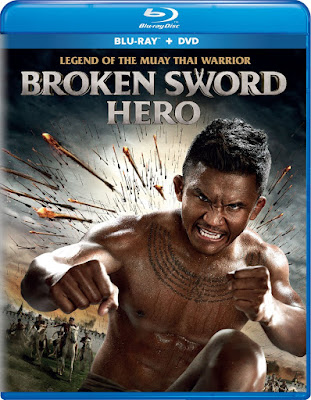 Based upon the real life of legendary Muay Thai warrior, Thongdee (Buakaw Banchamek), who went on to be a legendary military general during Thailand’s Ayutthaya period, Broken Sword Hero traces the beginnings of his journey. Even untrained, he is shown to be a natural fighter, and the early segments of the film are simply a series of Muay Thai fights in-between sequences of training montages. Traveling around the countryside of Thailand, our hero and his friends learn different styles of fighting and eventually obtain skills with a sword. Thongdee also learns humility, losing the arrogance that he had before his first defeat.

Although there is an underdeveloped rivalry that ends in a climactic fight for the freedom of his people, a majority of the film is spent watching Thongdee travel to different masters to train, before perfecting their specialty and moving on to the next one. This is never altogether boring because of the constant martial arts action, but the fighting would have had even more impact if the film had taken the time to give us reason to care for the characters. Even with a love interest and comedic relief crammed into the story, the story in the film never feels fully realized. It is ironic that a movie about a real person would have a protagonist that feels so underdeveloped. Technically speaking, Broken Sword Hero is something to behold, but the narrative doesn’t come close to being as engaging.

The Blu-ray release also includes a DVD copy, although that is just about it as far as special features are concerned. With that being said, anyone considering watching this film should attempt to do so in high definition. The quality of the Blu-ray presentation highlights all of the film’s technical accomplishments. The cinematography is the obvious reason to enjoy the Blu-ray, but the sound design for the film is also often energetically enhanced by the DTS-HD Master Audio.