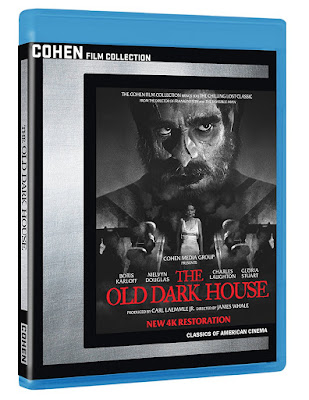 A year after finding monumental success at Universal Studios with Frankenstein (1931), James Whale reunited with Boris Karloff to make The Old Dark House. What first appears to be one of the first haunted house films actually sets up the template for another horror genre that would primarily become popular in the 1970s with movies like The Texas Chainsaw Massacre. There are no real supernatural events in The Old Dark House, and the only monsters are the disturbed humans that occupy the gothic estate. When a group of normal men and women find themselves stranded by a storm, they must survive the night and their abnormal and potentially dangerous hosts.

The first to arrive at the gloomy house in Wales is married couple Philip (Raymond Massey) and Margaret Waverton (Gloria Stuart), who are joined by their bachelor friend, Penderel (Melvyn Douglas). They are greeted fairly inhospitably by the elderly owners of the home, Rebecca Femm and her passive brother, Horace, who agree to let them wait out the passing of the storm without much warmth. The number of the visitors increases when Sir William Porterhouse (Charles Laughton) and his chorus girl companion (Lilian Bond) also emerge from the storm looking for shelter. Little do these five guests know, as rude as Rebecca and her brother may be, they are the least dangerous inhabitants of the home.

The first warning of danger comes when there is word that the butler, Morgan (Boris Karloff), has gotten into the liquor supply. The monstrous man spends the remainder of the film stumbling around the house, leering and groping at Margaret, assaulting anyone who gets in his way with unrivaled strength. As the group is split up, some members discover the existence of other family members, including an elderly patriarch that is bedridden, and a homicidal pyromaniac brother hidden away in one of the bedrooms.

The gothic horror remains a constant in the film, from beginning to end, but the movie is far more interested in the intricacies of the relationships between the guests than any cheap scares. As a result, much of the movie is spent in clever banter, showcasing the natural charms of the cast and providing a great deal of levity to the proceedings. Whale proves to be just as interested in the comedic relief as he is the eerie qualities of the narrative, most of which come out in the atmospheric setting and photography. It would be easier to emphasis the horror as much as the humor if it weren’t for the lack of actual danger and the abruptness with which the entire endeavor ends. There isn’t even a need to dispatch the villain, because there is never one monster distinguished among the disturbed inhabitants of the old dark house.

Despite being thought lost for several decades, the print of The Old Dark House which was eventually discovered is in surprisingly good condition. This Blu-ray release offers a newly restored 4K presentation of this print, offering the most clarity you are likely to find in a film this old. Along with two commentary tracks and a featurette about Curtis Harrington’s discovery of the lost print, there is an all-new interview with Sara Karloff. The first commentary includes star Gloria Stuart, while the second is delivered by James Whale biographer, James Curtis. There is also a small booklet insert included in the package, which has excerpts from an interview with Harrington along with a few production photos.