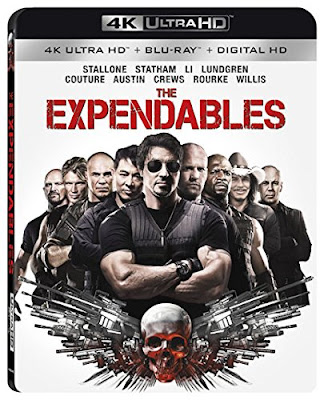 Joining Stallone is a plethora of action stars, new and old, but only a few have major roles. Jason Statham has a considerable co-starring role as Lee Christmas (the only one currently announced as returning for The Expendables 4), with Jet Li and Dolph Lundgren given the largest supporting roles. There are also several  WWE wrestlers trying to have acting careers, Terry Crews for both muscle and comedic relief, and Mickey Rourke in a few confounding dramatic scenes, not to mention the brief cameos from Bruce Willis and Arnold Schwarzenegger. Both of these major 80’s action stars would return in larger roles for The Expendables 2, along with Chuck Norris as an occasional ally and Jean-Claude Van Damme as the villain. 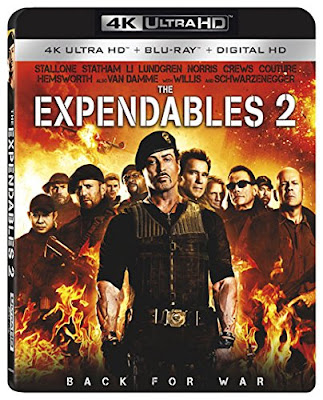 The storylines in these films are often overly simplistic, and not necessarily that important to the enjoyment of them. In the first one there are bad guys in South America and our heroes are the mercenaries hired to stop a dictator from terrorizing innocent people. The second film is slightly connected by the return of Willis’ character, who sends the team on another mission to save the world from a brutal group of mercenaries. Unlike our heroes, this team is led by a man (Van Damme) willing to become a terrorist for hire when five tons of hidden plutonium is discovered. Little else matters beyond each action sequence and the one-liners spoken in-between. Each films feature a predominant amount of masculinity, extremely violent action, all peppered with bad one-liners and self-aware silly action dialogue.

With the over-the-top action being the primary highlight of each film, these are welcome releases on 4K Ultra HD. Although the increased resolution is not quite as impressive as one might hope, the HDR makes the colors of each practical explosion from filming seem to jump right off the screen. It is brighter with even more depth than the Blu-ray release (which is also included as a supplemental disc to the package, as well as the vehicle for the additional special features). The sound is another highlight of the enhanced presentation, as these movies are both filled with thunderously masculine soundtracks filled with roaring engines, massive explosions, and high caliber gunfire. There are no new special features on either release, mostly because the 4K disc comes with the film only, taking up too much space to include any extras. The Blu-ray disc included with each package has plenty of special features, but they are the same discs as the original Blu-ray release and contain no new extras. The primary reason for buying these releases is the enhanced presentation of the films, and it is impressive enough of an upgrade for fans of these films and so-bad-it’s-good action movies.

For those unaware of the previously released special features from the Blu-ray discs, each includes director’s commentaries and a plethora of making-of featurettes. The first film comes with both a making-of feature, as well as a postproduction documentary. The second film has featurettes about the casting, the weaponry from the film, real-life mercenaries, and even one about the 80’s action films that inspired the franchise. Both films also come with deleted scenes, a gag reel, and promotional materials. Each 4K release also includes a Digital HD copy of the films.