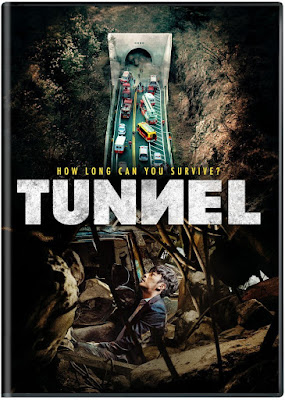 As family man Jung-soo (Jung-woo Ha) is on his way home from a business trip, he travels through a newly built tunnel when it inexplicably collapses on him. Immobilized within the rubble, Jung-soo has only his cell phone and car radio to connect him to the outside world. Getting help to come after being trapped is not difficult, but the task of getting to him amidst the debris is far more complicated. First is the difficult task of finding him, followed by the delicate process of getting to Jung-soo without causing the tunnel to collapse even further. All of these factors promise a lengthy rescue, while Jung-soo has limited resources in his car to help him survive.

As inventive as the film is in giving our surviving protagonist things to do within the confinement of the tunnel, the 127-minute run-time is only possible by spending as much time with the members of the rescue operation and commentating on the outside world’s reaction to the disaster. Heading up the rescue is an empathetic man named Dae-kyoung (Dal-su Oh), though he is forced to battle against outside forces in order to accomplish the task. Making the job even more urgent, Jung-soo’s wife (Doona Bae) remains at the rescue site, cooking food for the workers as the only way to show appreciation for their efforts.

As much as this is a survival tale, it is also a commentary on the culture surrounding such events. The media cares less about the life of the man than the perception of events. The media and government officials repeatedly get in the way of the operation, trying to gain publicity or a good story from the tragic accident. On top of that, construction of another tunnel in the area is forced to halt during the rescue, costing so much money that some begin to question the worth of a single human life. Although the satirical elements of the film are often frustrating, the humor is also a welcome break from some of the bleaker aspects of the narrative.

Some critics have complained about the unnecessary length of Tunnel’s run-time, but I actually disagree. There are moments that it begins to feel redundant, or as though the disaster may never end, but I think that is the point. We are meant to be emotionally exhausted by the end, and we slowly grow to truly care for the character because of the amount of time we have spent in his company. A shorter film may have made the survival suspense seem more intense, but it also would have lessened the emotional impact. Tunnel is proof that a film can have both character development and the spectacle from the disaster, something that Hollywood blockbusters in this sub-genre could learn to do better.

The DVD contains no special features.