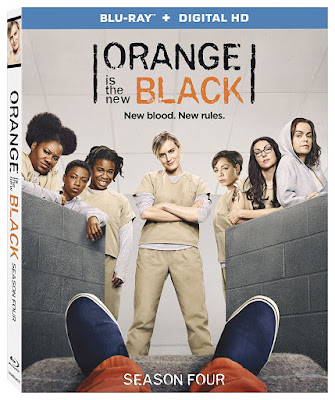 The basic premise follows upper class Piper (Taylor Schilling) as she deals with the jarring lifestyle change that comes when she is incarcerated for her past drug smuggling with a former lesbian partner and girlfriend, Alex (Laura Prepon). This instigates a series of soap-opera type twists and turns in the narrative, along with all of the expected prison drama, from shower shenanigans to fears of being shanked. All of the elements of the series have been seen elsewhere, but it is series creator Jenji Kohan’s unique sense of humor, paired with a penchant for cliffhanger endings, which give this series a distinct stylistic stamp. “Orange is the New Black” may have been originally based on the memoirs of Piper Kerman, but has evolved into more of an ensemble series just as much concerned with the other characters in the prison. This ensemble includes an assortment of villains, victims and a combination of both, though this season pulls back on prisoners being the antagonists, instead allowing a group of ruthless new guards to fill those roles.

The off-putting selfish nature of the main protagonist becomes somewhat of a larger problem in this season, which is why the increased distastefulness of other villains is important. Piper’s true desires and intentions rarely seem known even to her, though her actions are always predictably made out of self preservation alone. Beyond that, she becomes arrogant in the ability to create a side business from inside prison and is decreasingly sympathetic for the first half of this season. Instead, the show begins to sympathize with Alex, whose selfish actions were previously seen as the reason that Piper was in prison in the first place. Alex was also the focus of the season three finale and cliffhanger, forced to protect herself against a hired hit-man disguised as a guard, though season four focuses on the guilt she feels in the aftermath of that problem’s resolution.

While Piper is blissfully selfish in her aspirations to be a prison mogul and Alex is suffering with her guilt, the rest of the prison is dealing with massive budget cuts, overcrowding, and the administrative changes that ultimately result in a culture war meant to mirror current events in America. Without spoiling a huge dramatic twist, the ruthlessness of the guards eventually leads to an event that takes on a social issue head-on, and in a way that thoughtfully considers each side. There is no doubt that these themes will continue in the fifth season (premiering on Netflix June 9th), as the series once again ends on a massive cliffhanger, this time involving everyone in the prison.

All thirteen episodes from season four are included in this Blu-ray package, along with a Digital HD copy. There are also commentary tracks on episodes, a featurette with a tour of the “Orange is the New Black” prison set, and a gag reel to lighten things up slightly. I am somewhat surprised that there are not more featurettes dealing with the social issues this season has chosen to focus on, even though the cast and crew discuss it within the commentaries.