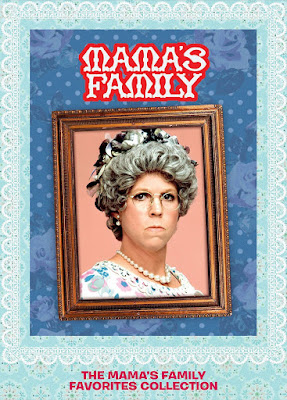 Although it was toned down from its original sketch form, “Mama’s Family” remained mostly faithful to ‘The Family,’ even carrying over many of the cast members (all except Tim Conway). Even Burnett reprised her role for a few years, along with guest appearances from Betty White between time spent on “The Golden Girls.” The show essentially just followed the constant bickering of the family, with Mama Harper constantly interjecting with her opinion. Irreverent at its core, but endlessly amusing, the Harper family was the first truly dysfunctional family on television.

The “Mama’s Family” Favorites Collection is made up of six individual DVD releases with hand-picked episodes from each of the six seasons. The first season has seven episodes picked out by Vicki Lawrence herself (Vint and the Kids Move In, The Wedding-Part 1, The Wedding-Part 2, Cellmates, Family Feud, Positive Thinking, and Mam’s Boyfriend), while the remaining DVDs only have six episodes per season. Cast members changed as the show went into syndication, but Lawrence was there until the very end, with the arrival of a new baby, Tiffany Thelma Harper. Although this family often seemed to exist in an alternate world, with the fictional town of Raytown, USA containing parodies of actual businesses, such as Ray-Mart, K-Ray and The Donut Hut, the episodes where Mama Harper bridged the gap into reality to make appearances on “Family Feud” and “Jeopardy” are included in this set.

With only six (or seven) episodes per season and no special features, truly dedicated fans of “Mama’s Family” may want to consider splurging on the complete collection, but this is a great starter set for those just getting into the show. It has some of the best episodes with many of the favorite guest appearances, leaving the viewer wanting more.