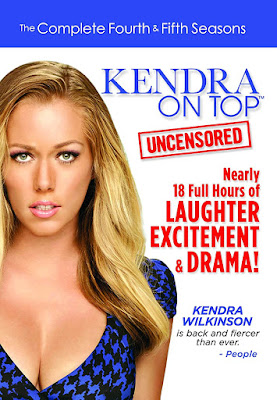 If you take away Wilkinson’s relationship with Hefner and some career-making breast implants, there isn’t much to make her stand out, besides a bad attitude and immature sense of entitlement. This is apparent in the fourth and fifth season of “Kendra on Top,” which exploits difficulties in Wilkinson’s personal life after her husband is caught in an adultery scandal with a transgender model. If you feel bad about a reality TV crew cashing in on their misery, keep in mind that the couple also signed on to address these problems on “Marriage Boot Camp” with a group of other desperate celebrities with fading relevance.

In reaction to problems in her marriage, Wilkinson acts even more selfish than usual in the fourth and fifth seasons of her narcissistic series. Oblivious to the hypocrisy of her own behavior, Wilkinson reacts to her husband’s adultery by keeping him at a distance and flirting with any attractive male celebrity that she encounters. She isn’t even a good liar, so it is easy to see when she is deflecting responsibility for her own actions by lashing out, admitting to getting turned on by thinking about ex-boyfriends and sexting them as a means of lashing out. Her various trips away from her husband and son are nearly always paired with excessive drinking and questionable flirtations, just like everyday life with her family leads her to complain incessantly about boredom.

Even if you can look past the obnoxious nature of the show’s subject, “Kendra on Top” is horrendously made. It is truly TV for the lowest denominator, so idiotic that it feels like it kills brain cells, especially since it would take inebriation just to find this mildly entertaining. So little is expected of the audience intelligence, Kendra’s name is even put on screen every time she appears. Let me be clear, they don’t just list her name at the beginning of each episode; every new scene continually reminds us of her name, despite it being in the title of the show. It feels as if the series is completely aware that the only way most people will watch this show is by accidentally stumbling on it while channel surfing. This is just the tip of the iceberg, as the show also heavily manipulates situations with editing and staging, essentially fabricating drama in a show that would otherwise just be filled with the whining of an entitled spoiled brat reality TV personality. Devoid of any character or moral fiber, Wilkinson is only good television because of how obnoxious she is.

All of season four and five episodes are included on four discs along with special features. I don’t know exactly how many episodes there are, but it is almost eighteen hours of bad TV. The extras include deleted scenes, which are beyond useless, photo galleries to enhance the narcissism, a crappy music video, webisodes, and other terrible promotional material. My brain hurts just thinking about how worthless Wilkinson’s contributions to pop culture are.
Hefner