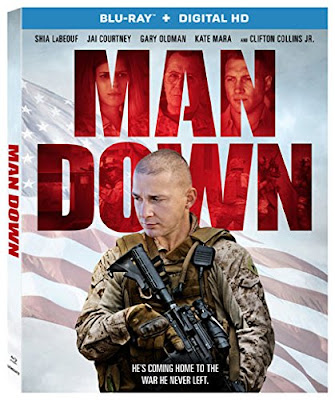 Man Down is disorienting in its decision to split the film into three sections, bouncing back and forth between an imagined wasteland of America where a former U.S. Marine named Gabriel Drummer (Shia LaBeouf) searches for his family, flashbacks of his time in Afghanistan and pre-deployment family life, and another flashback in which he tells a superior officer/military psychologist (Gary Oldman) about an incident that occurred during a mission. This is the largest problem with the film, keeping the audience perplexed until the last third of the film. Not only is it confusing, but by allowing the audience to think that there is a futuristic element of the story, it ultimately deflects from the realism in the narrative. I understand the filmmaker’s decision to keep the reality about the post-apocalyptic vision hidden, but it ultimately decreases the impact of real issues for veterans in favor of entertainment elements that feel contradictory.

In the flashbacks we are given an opportunity to see Gabriel in his home life with wife (Kate Mara) and son, but with a 90-minute run time, this feels too rushed for any real development. Likewise, even though we are given perfunctory scenes showing the bond between Gabriel and a fellow Marine named Devin (Jai Courtney), there is not enough time spent with the characters for their relationship to feel earned. Like dominos falling down, this inevitably affects the impact of events in the storyline. When we start with a cliché, there is little room for the plot twists to have the desired emotional power that is clearly intended.

Perhaps the saddest result of the sloppy screenwriting is the wasted use of some excellent acting, especially from LaBeouf. Odd personal antics and behavior aside, LaBeouf is truly a dedicated actor, regardless of what projects he attaches himself to. Whether it is a large budget blockbuster like Fury or small independent movies like last year’s American Honey, LeBeouf completely commits himself to the role. This is clearly Man Down’s greatest asset, though it often feels wasted within a narrative that feels exploitative in its effort to trick audiences into buying into the message of the film.

The Blu-ray special features only have a commentary track, though it shows the priorities of the filmmaker quite clearly. The commentary includes director Dito Montiel, along with Military Consultant Nick Jones Jr. but no amount of military realism is enough to compensate for the shortcomings in story structure. The Blu-ray also comes with a Digital HD copy of the film.