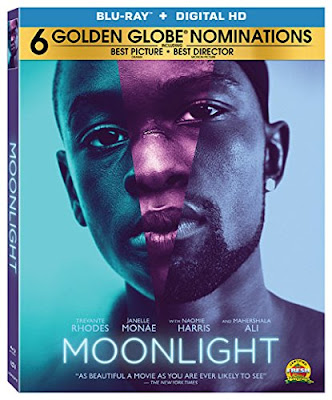 But I realize that much of this reaction is coming from my response to the Academy Awards and not the film itself, which is unfair. Moonlight is a fantastic film, but I am simply responding to the unfair negativity many Moonlight supporters expressed about La La Land as pushback to the praise it was receiving. I can appreciate Moonlight while still loving La La Land, even if many Moonlight supporters seem to have taken up the cause of bashing La La Land undeservedly. For me, it is not one or the other. Each film serves a different purpose and I can appreciate them each individually, even though there are faults to be found in both.

Moonlight is the epitome of an episodic storytelling, splitting the narrative into three sections with long breaks in time between them. We follow a young black man growing up in a rough neighborhood of Miami, from childhood (Alex Hibbert) through teenage years (Ashton Sanders) and into young adulthood (Trevante Rhodes). His name is Chiron, but kids call him Little as a child and Black when he’s an adult, but this film is about more than just race issues. This is certainly part of the narrative, but even more significant is the struggles Chiron has coming to terms with his sexuality while growing up in a masculine society. He is also forced to face the incongruity of being raised by a drug-addicted mother, only to grow up to be a drug dealer himself. Ultimately, with all of the noise of the social issues crowding the narrative, this is a simple love story between Chiron and a childhood friend named Kevin (Jaden Piner, Jharrel Jerome, André Holland).

At times, the attempt to cram too many social issues into the narrative can detract from the love story at the center. And there are moments that the relationship between Chiron and his drug-addicted mother feel somewhat contrived, though the performance by Naomie Harris quickly overshadows these shortcomings in the screenplay. In fact, dedication from the actors and the performances Barry Jenkins is able to coax out of them as director makes many of the films flaws seem inconsequential. Even still, this is not an easy film. When I watched it for the first time, there were plenty of people leaving the theater in a bit of a befuddled daze, some of which even remarked that they “did not get it.” This is not the fault of the filmmakers, though it does point to the necessity to think about the narrative rather than just watch it.

Also, I must admit to being a bit conflicted by sections of Moonlight. One of the most powerful sections of the film was celebrated by the only acting win the film received, a Best Supporting Actor performance from Mahershala Ali as Juan, a drug dealer who takes Chiron under his wing in the first section of the film. The problem is that Juan is such a powerful force in the film’s narrative (much to the credit of Ali) that we miss him in the final two sections, as well as distracting from what seems to be the primary narrative in the remainder of the film. You can’t criticize anyone in particular for Ali being such a scene-stealing force, though it did make me long for his character’s return in one of the remaining sections.

Well, seeing as this Blu-ray release only has Golden Globe nominations to boast on its cover, we are likely to see some stickers boasting the Oscar wins quickly added to this package in coming weeks, though I don’t think there will be time by Tuesday’s release. I imagine there may also be an additional release to increase the special features included, though there are a few in this initial release. The highlight is the audio commentary by filmmaker Barry Jenkins, who I have been a fan of since his first understated (and highly underappreciated) first feature, Medicine for Melancholy. There is also a making-of featurette, a featurette about the music in the film, and one about the process of filming in the rough neighborhood of Miami and Jenkins himself grew up in. Also included in the package is a Digital HD copy of the film.
Entertainment Value: 8/10
Quality of Filmmaking: 9.5/10
Historical Significance:  10/10
Special Features: 8/10

I AGREE, WITH YOUR REVIEW OF "MOONLIGHT". I PURCHASED THE BLURAY. I USUALLY BUY THE BLURAY FIRST, DO NOT OPEN, BUT PERUSE THE REVIEWS FIRST PRIOR TO OPENING THE MOVIE CASE, JUST IN CASE I WANT TO RETURN. IN ADDITION TO YOUR REVIEW, I BELIEVE I WILL KEEP THIS MOVIE, AS ALL OF YOU CRITICS ARE GIVING THIS MOVIE "THUMBS UP" AND HIGH MARKS, BETWEEN A 90 AND 100. EVEN ON ROTTEN TOMATOES, IT IS RECEIVING ABOUT A 98 %. ALSO, WOULD LIKE TO ADD, I JUST HAPPENED TO COME ACROSS YOUR WEBSITE, YOUR BLOG, BY CHANCE, BY ACCIDENT, AS I WAS SEARCHING FOR REVIEWS OF THIS MOVIE, AND STUMBLED UPON YOURS. I WILL ADD YOUR BLOG, YOUR REVIEW WEBSITE, TO MY COMPUTER, SO AS TO ALWAYS LOOK AT YOUR REVIEWS ALSO IN ADDITION TO OTHERS, PRIOR TO BUYING. AND AGAIN, I THANK YOU. YOUR BLOG IS CONCISE, TIGHT, TO THE POINT. I APPLAUD YOU. KEEP UP THE GREAT WORK. (ALSO, I HAVE MET WARREN BEATTY AND FAYE DUNAWAY -SAME DAY, SAME FLIGHT BUT THEY WERE NOT TRAVELING TOGETHER PER SE, SHE WAS ALREADY ON BOARD WITH A FRIEND IN A MAN'S TUXEDO WITH A RED CARNATION IN FIRST CLASS, WITH A MALE FRIEND, AND WAS THE NICEST ACTRESS I HAVE EVER MET, AND AS I DEPLANED, WARREN BEATTY WAS BOARDING, TOOK A PIC WITH HIM, TOOK A PHOTO WITH HIM, AND GOT HIS AUTOGRAPH... THIS WAS BEFORE SELFIES AND BEFORE CELLPHONES, HAD 35MM CAMERA, AROUND 1989-1990 AT LAX, AND HE WAS ALSO NICE, AND REP TOLD ME LATER, I WAS LUCKY, AS HE NORMALLY WILL NOT DO THAT, BUT WHEN VIEWED THE ACADEMY AWARDS, I KNEW THAT THEY WERE NOT SENILE! NOT YET! KNEW IT WAS NOT THEIR FAULT, BUT WAS PROUD TO HAVE MET "BONNIE AND CLYDE"! HENCE, OSCARS WAS THE 3rd TIME THAT THEY WERE "TOGETHER", AS EVERYBODY PROBABLY SURMISED THE OSCARS WAS THE SECOND TIME TOGETHER, BUT I KNOW BETTER! LOL). OK, BYE.